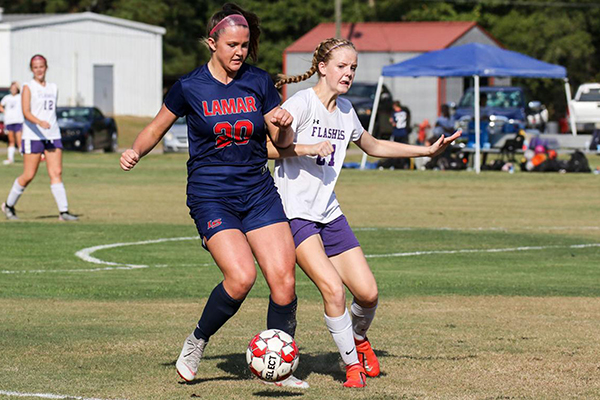 They didn’t go down quietly, but St. Aloysius’ time as soccer state champions has come to an end.

Lamar School broke through for three goals in the second half on Tuesday and beat the Lady Flashes 3-0 in the first round of the MAIS Division II playoffs.

St. Al won the Division III championship last season, but moved into a higher classification and finished with a 6-6 record this year. The Lady Flashes won three district games in a row just to qualify for the playoffs, and first-year coach Gio Baldizon said he was proud of the way the team rallied down the stretch.

“It was a tough season, with us moving into an upper division. But the girls fought hard and we make a heck of a run at the end,” Baldizon said.

St. Al gave Lamar School (10-6) all it could handle for a half. Two scoring chances, including a 2-on-1 opportunity, were stopped by Lamar keeper Bayleigh Brent.

Lamar, meanwhile, was equally frustrated by St. Al keeper Cameron Mathis. The senior made eight saves in the game against steady pressure from the Lady Raiders.

Finally, in the 43rd minute, Mathis and the defense cracked. Freshman Kaits Kerley scored to break the deadlock. Seventh-grader Bella Miller added a goal in the 64th minute, and eighth-grader Anniston Monsour in the 76th to finish things off.
Lamar does not have a senior on its roster.

“In the first half they found our weak side and kept attacking that side,” Baldizon said. “If you’re taking 20 shots on goal, eventually you’re going to get one in. The (defense) did their jobs for 40 minutes and eventually broke.”

St. Al, meanwhile, started to look ahead to next season. Six seniors are graduating, but among those coming back for 2020 are top scorer Elizabeth Theriot, midfielder Cati Mathews, and seven players who were freshmen or sophomores this year. Only two players on the roster are juniors this season.

“Where we were the first six games, we didn’t think we had a shot. The girls regrouped and had a team meeting after we lost 5-0 to East Rankin, and the seniors took it upon themselves to turn this thing around,” Baldizon said. “We made a run at it. It’s a different division, and by us making the playoffs we showed we belonged there. The seniors were awesome. With what we have upcoming, our future is bright.”