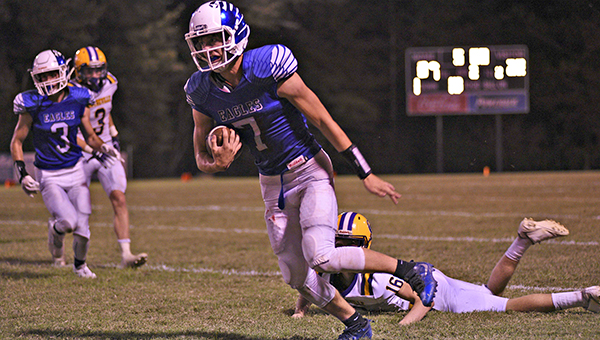 Porter’s Chapel Academy has reached a difficult point in its football season.

The losses and injuries are mounting. The grind of five long road trips in seven weeks is starting to take its toll. The frustration of missed calls and opportunities is building.

It’s adding up to a long, hard season for the Eagles but — for good or bad — it’s far from over. There are still four games left, including three against district opponents, which means there’s still time to turn things around and end on a positive note.

The first step is finding a way to win this Friday night, when the Eagles (1-5) head to the Big Easy to take on the New Orleans Home School Saints.

PCA has lost its last two games, and five of six this season. It comes into this game on the heels of a 44-6 defeat against Centreville Academy that did include a few bright spots.

The Eagles ran for 173 yards as a team, including 104 on 13 carries by John Michael Wilkerson. Tyler Washington added 53 yards on 13 carries. They only attempted four passes, partly out of necessity and partly because of the game plan, Purvis said.

“It was mostly keeping it simple, and trying to play into the skills of the guys we have. We have more run-oriented people, and the schemes we put in were effective. We’ve just got to try to shore up the overall operation of it so we can sustain drives,” Purvis said.

While the running game was effective against Centreville, Purvis did acknowledge the downside of relying so heavily on it. Namely, scoring drives take a lot of time and excellent execution, and any mistakes become magnified. A team that has often fallen behind this season also cannot afford to do so.

“We’re going to have to string together eight, nine, 10-play drives to score and we can’t afford to get behind the chains. It creates more of a sense of urgency in the first three quarters not to get behind,” Purvis said.

This is the second Louisiana home school team Porter’s Chapel has played this season. It lost 28-7 on the road against Baton Rouge-based CHEF on Sept. 13. The New Orleans Saints are 0-5, with losses to Centreville Academy, CHEF and Richland High School on their ledger, and all of the losses have been by 23 points or more.

Based on their experience with CHEF, and seeing some of the results against common opponents, Purvis said it was unwise to discount the Saints.

“Honestly, for the guys, it gives them a sense of what they’re facing,” Purvis said of having played CHEF. “The name of the school doesn’t determine the type of football team they have. Those schools play a lot of schools in our association, and they’re comparable to us in terms of size and skill.”

ONLINE:
For live updates and coverage on Friday night, follow us at vicksburgpost.com, facebook.com/thevicksburgpost, and twitter.com/vixpostsports