St. Al goes to Silliman with District 3-5A title hopes on the line 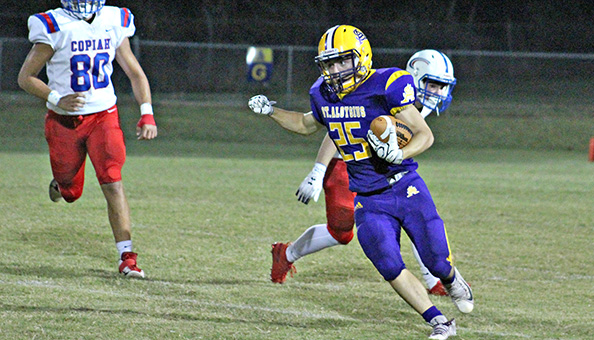 St. Aloysius’ Adam Francisco (25) returns a kickoff. The Flashes will go on the road Friday night to play Silliman Institute, with the winner moving into sole possession of first place in MAIS District 3-5A. (Ernest Bowker/The Vicksburg Post)

St. Aloysius entered this current three-game stretch with the hopes of playing for the MAIS District 3-5A championship by the end.

That’s still the goal, but the timetable has been moved up.

The Flashes go on the road on Friday to play Silliman Institute in a showdown for first place in District 3-5A. St. Al (3-3, 2-0 District 3-5A) has a half-game lead on the Wildcats (4-2, 1-0), and can clinch at least a tie for the district title with a win or fall out of contention with a loss.

“We know they’ve got good speed and quickness, and we’re going to play for a district championship. That’s something to get motivated for,” St. Al coach Michael Fields said.

ACCS won the Class AAA championship last season and is still very much alive for the district title. It plays St. Al next week in Natchez.

Silliman’s win over ACCS, however, set up this week’s somewhat unexpected matchup with St. Al for the inside track to the title. A win would also push St. Al closer to another big goal, which is a spot in the top eight of the Class 5A playoff bracket and a home game in the first round.

“The pressure of being in the playoffs is off. I think we solidified that. Now the goal is playing in the top eight, and the district champions automatically have that. So that’s our goal,” Fields said.

The Flashes are coming off a 35-7 win over Copiah Academy that was thoroughly dominant, and achieved with an offense that was refreshingly diverse.

Quarterback Alvin Brown carried the ball 29 times for 206 yards, but also completed 10 of 12 passes for 185 yards. Along with a 27-yard halfback pass for a touchdown from Kieran Theriot to Trinye Brown early in the third quarter, the Flashes finished with 212 yards through the air. They had thrown for 189 yards in their first five games combined.

With starting QB Phillip Upshaw expected to miss his third game in a row because of a back injury, the Flashes will still rely heavily on the run. Last week’s success in the passing game, however, should give defenses a second threat to worry about, which Fields hopes will make the entire operation better.

Brown has rushed for 831 yards and six touchdowns this season, and is averaging 8.4 yards per carry.

“It takes a lot of pressure off, and with Alvin being such a good runner being able to throw the ball leaves a lot of running lanes for him to take off when things break down,” Fields said. “The passing game is starting to get better at the right time. And we have a history of getting better as we go, so I’m hoping that continues.”

ONLINE:
For coverage and updates on Friday night, follow us at vicksburgpost.com, facebook.com/thevicksburgpost, and twitter.com/vixpostsports