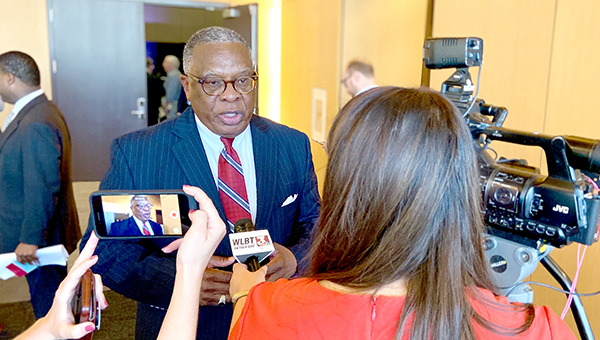 Business executives and government officials from across the country met in Jackson earlier in the week to discuss opportunity zones and hear the story of Vicksburg lumber.

“We talked about how it originated, how we put it together, and we were able to save the jobs,” said Mayor George Flaggs Jr., who was a member of a Tuesday panel discussing opportunity zone development.

“The reason I was on there was because I was a part of the first one (opportunity zone development) in the United States,” Flaggs said. “They asked me to speak about Vicksburg; its progress and why the opportunity zone worked for us and how it can be a model for the country.”

Opportunity zones are an inducement for long-term economic investment in economically distressed areas. The tax break incentives offered through the opportunity zone program allow investors to protect their investment.

Vicksburg has three opportunity zones, “And we’re going to make every effort to utilize them,” Flaggs said.

The Anderson-Tully mill is in one of those zones.

The Forestland Group, which bought Anderson-Tully in 2006, announced earlier in 2018 that it was closing the mill — a move affecting the 158 workers at the plant.

Flaggs said the opportunity zone containing the mill has area to open another industry and a residential area.

He said another opportunity zone includes the Mississippi Hardware building, which is being converted into the Mississippi Center for Innovation & Technology, an innovation and tech transfer center to serve the Vicksburg area and the entire central Mississippi region.

“It was a great panel, a great session,” Flaggs said of the Tuesday program, adding, “Once again, it puts Vicksburg on the map. People are looking to Vicksburg for a model for their opportunity zones.”