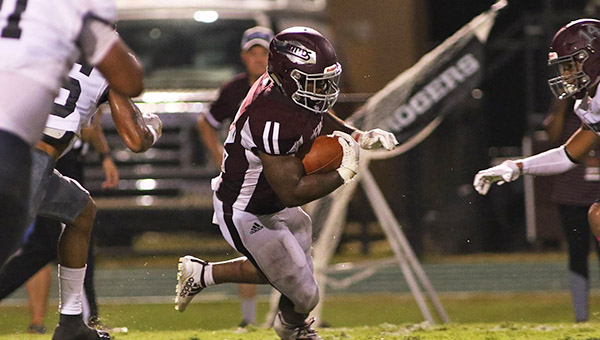 RAYMOND — Hinds Community College got its work done early Thursday night and then took it easy.

The Eagles (5-1) scored all of their points in the first half and led 54-12 at halftime. The second half was played with a running clock.

After Elijah Pugh returned a fumble 75 yards for a touchdown to pull Coahoma within 7-6 in the first quarter, Hinds scored the next 47 points.

Don Ragsdale started Hinds’ scoring spree with a 33-yard touchdown run, while Turner scored on runs of 7 and 6 yards. Ragsdale finished with nine carries for 79 yards. Haywood had 68 yards on three carries, including TD runs of 38 and 28 yards.

No. 11 Hinds will be back at home on Oct. 10 as it takes on No. 15 Copiah-Lincoln in a crucial MACJC South Division matchup. Kickoff is scheduled for 6:30 p.m.

Northwest Mississippi (5-1, 2-1 MACJC North) led 42-16 after Jack Walker’s 66-yard touchdown pass to Cameron Wynn late in the first half. East Mississippi scored 20 straight points, however, to get within 42-36 on a 3-yard TD run by Zias Perryman late in the third quarter.

Jaquerrious Williams finally broke the scoring silence for Northwest with 9:37 left in the fourth quarter, as the freshman tailback wrapped up a six-play, 79-yard drive with a 35-yard TD run, moving the Rangers back ahead by two scores, 49-36.

Northwest came up clutch again on other side of the ball, as the defense stopped the Lions at midfield on fourth down. Nine plays later, Williams scored again on a 1-yard run to make it 56-36 with less than three minutes remaining.

Walker completed 15 of 26 passes for 283 yards and three touchdowns for Northwest. All three of his touchdowns went to Wynn, who finished with three catches and 144 yards.

Hiram Wadlington ran for two touchdowns for Itawamba, and Clark Mills scored on a 2-yard run.

East Central ended a 10-game losing streak to its South Division rivals and remained in first place in the division.