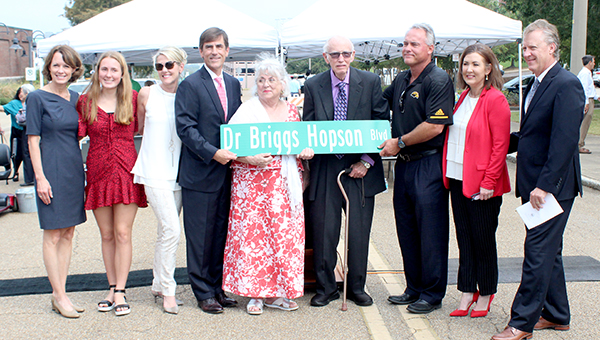 The family of Dr. Briggs Hopson Jr. pose with the street sign bearing his name after a ceremony naming a section of Mulberry Street from Veto Street to Depot Street Dr. Briggs Hopson Boulevard. The naming of the street in October of 2019 honors the doctor’s service to the community. (John Surratt/The Vicksburg Post)

For many years, Dr. Briggs Hopson Jr. served the city of Vicksburg and Mississippi in many capacities as a physician and community activist.

On Friday morning, that service was rewarded with the renaming of a section of Mulberry Street between Veto and Depot streets as Dr. Briggs Hopson Boulevard.

The street was formally rechristened during a ceremony attended by Hopson, his family and other Vicksburg dignitaries.

“Dad has always loved this community,” said Hopson’s son, state Sen. Briggs Hopson III. Discussing his father’s childhood in Delhi, La., he said his father came to Vicksburg with his family to shop, eat in restaurants and receive medical care.

“It’s awfully ironic that he would come here 52 years ago to start his medical career. He loved it as a kid, he told me, he loved it as he’s grown up and he continues to love this community,” Hopson said. “That’s what’s important. A lot of people I talked to said dad was a great physician for them and a great friend. He gave a lot outside the medical profession.

“His legacy will be part of the future of this community. We as the children are so proud, and we appreciate everything you’ve done for us, dad.”

Son Jay Hopson, who is the head coach at the University of Southern Mississippi, also honored his father, adding, “You made me proud to be your son, and just want to thank you for being such a great influence in the community and a wonderful dad.

Mayor, thank you for everything.”

“I consider him a great leader, a great pioneer and a great trailblazer,” Flaggs told Dr. Hopson’s family.

Flaggs recalled visiting Hopson in 1987 to seek his guidance about running for state representative.

He said most people know Hopson as a physician, “But you don’t know how much this great man has done for this city and its progress.

“I don’t know of anything progressive that he wasn’t on that side, whether health care or civil rights, he was always there,” he said. “He kept his door open, not only for this city, but for the state and the nation.”

Hopson, Flaggs said, donated hours to the community and highlighted his work in the development of Merit Health River Region and his service for the Miss Mississippi Pageant.

“Many young women’s lives were changed because of Dr. and Mrs. Hopson’s generosity,” Flaggs said, adding the couple guided two Miss Mississippi winners to the title of Miss America and “raised millions of dollars in scholarship money.”

Dr. Hopson, he said, practiced medicine in Vicksburg for 50 years, “providing quality and compassionate medical care to the citizens of this community and beyond. He was known as a giver of time and a resource for many people who needed help — be a helping hand.

“You can’t do this work that Dr. Hopson has done in Vicksburg and in the medical community and for our country and not be a divine inspiration. Dr. Hopson, we honor you.”

A native of Delhi, La., Dr. Hopson attended the University of Mississippi and went to medical school at the University of Tennessee. He began his practice in Vicksburg in 1967 after completing his internship and residency at the school’s medical center, serving as chief surgical resident and an instructor in surgery.

He retired in 2017 after serving 50 years as a physician and advocate for the medical profession and better medical care in the state. He was also one of the doctors who trained the Vicksburg Fire Department’s first emergency medical technicians and paramedics.

Dr. Hopson has been a community activist who has served many local organizations from the Red Carpet Bowl to the Miss Mississippi Pageant and is recognized as a driving force in the design and development of Merit Health River Region, formerly River Region Medical Center.