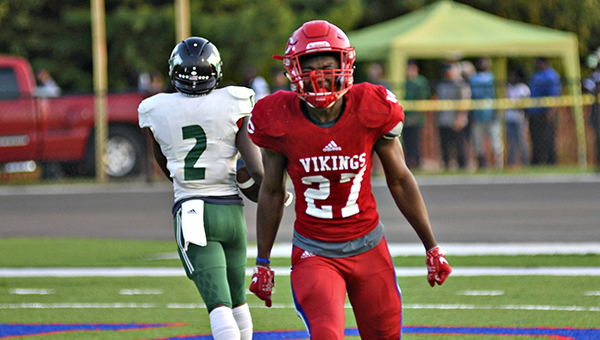 Warren Central's Tyrique Willis (27) reacts to making a tackle earleir this season. Willis has 34 tackels this season for the Vikings, who host Greenville for their homecoming game on Friday night. (Courtland Wells/The Vicksburg Post)

In the rough and tumble world of Region 2-6A, the toughest in Mississippi Class 6A football, some games obviously carry more weight than others.

The one Warren Central is facing this week carries “must win” status for a different sort of reason.

The Vikings (3-2, 1-0 Region 2-6A) will welcome Greenville (3-2, 1-0) to town for homecoming. It’s a game Warren Central has usually won — eight times in a row, and 25 out of 26 since 1981 — and one it needs to win again. A victory would keep it in first place in the region with a road trip to No. 1 Madison Central looming next week, and on track to eventually earn a playoff berth.

“Greenville is sitting at 3-2 and is very, very talented. This game counts the exact same amount as the rest of them, and we’ve got to make sure we stay focused on the opportunity in front of us,” Warren Central coach Josh Morgan said. “Out job is to make sure we’re ready to play and the guys are locked in, and we’re better this week than we were last week.”

Greenville, typically, has not been much of a match for Warren Central. The Vikings have held Greenville to eight points or less five times during their current eight-game winning streak in the series, including each of the past two years.

The Hornets, though, have already surpassed their win total from the past two years combined — they were 2-20 in 2017 and 2018 — and can make a major statement by knocking off a perennial playoff contender. The Hornets beat Murrah 14-9 in their region opener last week, and Morgan said they have enough big-play ability to be dangerous.

“They’ve got athletes everywhere. They’ve got a majority of their skill players back with the tailback, quarterback and a couple of receivers. That recipe can be trouble,” Morgan said. “Anybody that can throw and catch it like they do is dangerous. Our preparation is going to be key. That’ll be a challenge to slow that down.”

Warren Central had an uneven start to the season, with an impressive victory over Holmes County Central followed by a blowout loss against No. 5 Pearl. The last two games, however, it seems to have found its footing.

A 10-9 loss to No. 3 Brandon before the bye week was followed by a 35-7 rout of Germantown in the region opener. The Vikings had nearly 400 yards of total offense, including 252 rushing, against Germantown while the defense had four sacks and two takeaways.

Warren Central had 18 new starters on the field for the season opener against Holmes County Central. A few games of seasoning have led to some improvement, and Morgan praised the effort of his players to overcome some injuries that have thrust even more new players into bigger roles.

Against Germantown, the Vikings were without senior running back Jerrious Stovall. In his place, junior Kentrick Thompson had a career-high 15 carries for 102 yards and one touchdown, and sophomore Antonio Thomas added 95 yards and a TD. Thomas also caught three passes for 42 yards and a touchdown.

“A lot of credit goes to the football team right now,” Morgan said. “We had injuries and were already inexperienced. There’s been no letdown or excuses. The guys have found a way to get better. I’m very proud of them. But this is not the time to reflect on it.”

Another first-year starter who has made strides is quarterback Parker Kivett. The senior is completing an impressive 67.6 percent of his passes this season, and has only thrown two interceptions in 68 attempts. He was 10-of-16 for 126 yards, with one touchdown and one interception against Germantown. He also ran for a touchdown.

Kivett’s stats have steadily improved since the opener — he’s thrown for more than 100 yards each of the past three games, after totaling 138 in the first two — and Morgan said he’s done a good job of limiting mistakes while keeping the offense moving.

“The biggest thing with Parker is, he’s improved every week and he’s done a good job protecting the football,” Morgan said. “He’s doing a good job in the huddle and showing poise when we need it.”

ONLINE:
For coverage and updates on Friday night, follow us at vicksburgpost.com, facebook.com/thevicksburgpost, and twitter.com/vixpostsports