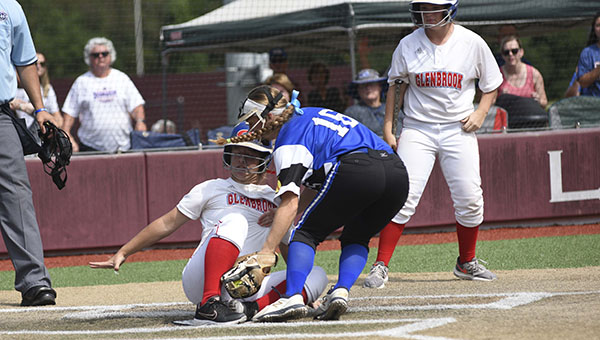 They might have had a great season — the best in school history, in fact. They might be one of the best fast-pitch softball teams in the Mississippi Association of Independent Schools. And if they played Glenbrook Academy a hundred times, each side might win 50.

But on this day, in this one-game situation for all the marbles, they were not bringing home the trophy they’d come to claim.

Glenbrook pitcher Alyssa Martin allowed three hits, walked none and struck out two as the Lady Apaches beat Porter’s Chapel 3-0 on Saturday in the winner-take-all Game 3 of the MAIS Class 2A championship series.

PCA scored twice in the bottom of the sixth inning to win 2-1 in Game 2 and force a finale in the best-of-three series, but its bats went cold after that. It only hit one ball out of the infield after the second inning of Game 3 and Martin retired 14 of the last 15 batters she faced.

“It is (hard), but the journey that we’ve been on all year is still a goal. It’s still success. We won district, we won South State, and they’re still No. 1 in my book,” PCA coach Chandler Ellis said. “I can’t be prouder of them than the way they came back from the defeat on Wednesday. Just for them to come back from that is a big plus.”

Glenbrook won its first softball state championship, while PCA (24-10) had to settle for runner-up status for the first time. The Lady Eagles’ best previous finish in the state tournament was third place in 2004 and 2005.

Along the way, PCA won the District 5-2A championship, the South State tournament — also the first time it had done that since 2005 — and seven consecutive postseason games before running into Glenbrook in the finals.

The scale of what they did accomplish was not lost on the Lady Eagles.

One thing the Lady Eagles took extra pride in was the way they bounced back from adversity in the championship series. Glenbrook had won Game 1 on Wednesday, 11-1, and seemed on the verge of wrapping up a sweep in Game 2 when Emma Earnhardt tripled and scored on a wild pitch to give the Apaches a 1-0 lead in the top of the sixth inning.

PCA scored twice in the bottom half, however, while only hitting one ball out of the infield. A single to the outfield by Britnee Martin, a bunt single by Jenn Smith, and an intentional walk to Embry loaded the bases. Meghan Hinson then hit a comebacker that Martin beat the throw home on, and Smith scored on a ground out.

Embry worked around two hits in the top of the seventh to secure the 2-1 victory and send the series to a third game. The momentum of the thrilling comeback victory did not carry over after a 30-minute break, though.

Alyssa Martin led off Game 3 with a double to the center field fence and scored on a single by Reese Hanson to give Glenbrook a 1-0 lead two batters in.

The Apaches added an unearned run in the third inning, and another in the fourth on Alyssa Martin’s RBI single to make it 3-0. From there, Martin’s pitching and the defense behind her dominated the game.

PCA’s best chance to score came in the second inning, when Storey Kirklin hit a one-out single and Katie Tillman followed with a hard grounder through the right side. Glenbrook right fielder Colby Hollis quickly fielded the ball and threw Tillman out at first base. Macey Bufkin followed with a fly out to center field, and the rest of the game was an exercise in offense frustration for the Lady Eagles.

The only balls they hit out of the infield after the second inning was a one-out double by Smith in the sixth, and a fly out to left by Embry to end that inning. Alyssa Martin recorded 11 of the last 14 outs via ground balls or strikeouts.

“They studied us well. They moved with every at-bat, every player we had in the box. They were prepared,” Ellis said.

Glenbrook coach Roo Johnson said homework and execution on defense were the keys to her team’s victory. Glenbrook committed one error in two games Saturday — on 40 balls put in play — and its outfielders threw out two runners on the basepaths.

Alyssa Martin only walked two batters in 14 innings, one of them intentionally. Of the six hits she gave up, two were infield singles.