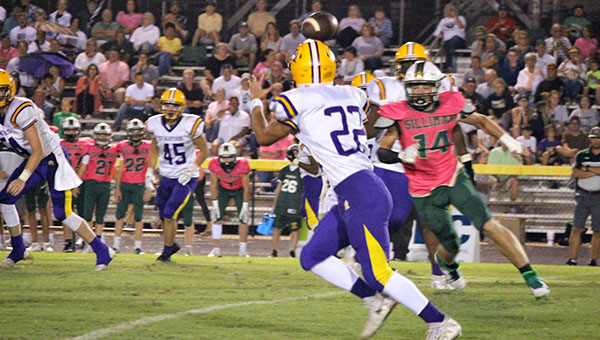 St. Aloysius’ roster dwindled almost as fast as its hopes of winning a district championship on Friday night.

With five starters sidelined by injuries, the Flashes gave a game effort before running out of gas in the second half and losing 36-3 to Silliman Institute.
Silliman (4-2, 2-0 MAIS District 3-5A) scored 21 points in the third quarter to blow the game open and all but clinched the District 3-5A championship.

Silliman has already beaten St. Al and Adams County Christian School, the top two teams in the district, and needs only to beat either struggling Central Hinds or Copiah Academy later in the season. Silliman plays those teams in its last two games of the regular season.

St. Al (3-3, 2-1) still has hopes of earning a high seed in the Class 5A playoffs as a wild card and hosting a first-round playoff game.

“We’ve still got hopes for that. We just have to regroup and get some guys healthy, and I think we can make a run at it,” St. Al coach Michael Fields said.

Leading rusher Alvin Brown did not start and Michael Robinson, the team’s leading tackler, did not play at all because of injuries. Offensive lineman Ben Raines was out as well.

Given those key absences, the Flashes might have done well to hang in even for a half. Kieran Theriot kicked a 33-yard field goal for an early lead in the first quarter, and they went into halftime down only 8-3 after Silliman’s Bo Gilkison scored on a 30-yard run in the second quarter.

In the second half, however, the lack of depth and Silliman’s speed changed the complexion of the game.

Silliman quarterback Jack Jackson — one of the top sprinters in the Mississippi Association of Private Schools — threw a 39-yard touchdown pass to Brock Berthelot and ran for a 5-yard score. Elijah Clyde returned an interception 34 yards for a touchdown with 2:31 left in the third quarter to put Silliman ahead 29-3, and that was just about it for the Flashes’ district championship dreams.

Jackson scored on a 1-yard run in the fourth quarter to finish the scoring. Jackson also accounted for a pair of two-point conversions, one running and one passing, for the Wildcats.

“We had too many injuries and didn’t have enough firepower. The floodgates opened in the third quarter,” Fields said. “When you’re missing five starters off of a small school like ours, there’s only so much you can do. We gave a gallant effort and just couldn’t hold out.”