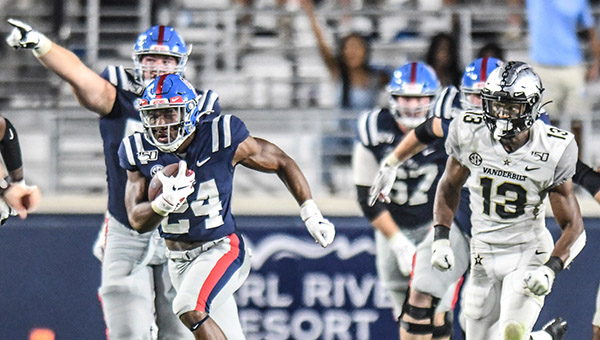 OXFORD (AP) — Jerrion Ealy and Snoop Conner each had big touchdown runs in the third quarter to help Ole Miss pull away from Vanderbilt for a 31-6 win on Saturday night.

Ole Miss (3-3, 2-1 Southeastern Conference) broke open a precarious 10-6 halftime lead with the scoring runs on the first two series of the second half. Ealy ran for a 78-yard touchdown and finished with 97 yards on the ground. Conner had 91 yards, with 84 coming on his touchdown run.

Quarterback John Rhys Plumlee led Ole Miss with 165 rushing yards on 22 carries, and scored on a 33-yard touchdown run in the first quarter.

Scottie Phillips added a 24-yard touchdown run in the fourth quarter for the Rebels, who finished with 512 yards of total offense that included 413 rushing yards. It was the highest single-game rushing output by an SEC team since 1979, when the Rebels ran for 443 yards against Vanderbilt.

Ryley Guay kicked field goals of 22 and 43 yards for Vanderbilt (1-4, 0-3) in the second quarter, but the Commodores never seriously threatened in the second half.

Ke’Shawn Vaughn had 69 rushing yards for Vanderbilt, which was limited to 62 rushing yards as a team and was 2-for-17 on third down conversions.

Kickoff was delayed four hours by lightning in the Montgomery area.

Davis fumbled on Alabama State’s next drive while trying to avoid a sack. Keyron Kinsler Jr. recovered for the Braves and Harper ran 18 yards to make the lead 14-0 with 4:47 left in the first quarter.

Harper completed 10 of 17 passes for 146 yards and three touchdowns, and ran for another score for Alcorn. Niko Duffey ran for 101 yards and one touchdown

Davis was taken off the field by stretcher late in the fourth quarter.

Grambling 44, Jackson State 21
De’Andre Hogues blocked a 37-yard field goal attempt and Devanir Martin scooped up the football and returned it 70 yards for a touchdown to spark Grambling to its first win of the season.

Jackson State’s home opener was spoiled in the 70th meeting between the long-time Southwestern Athletic Conference rivals. Grambling has won 10 of the last 11 meetings.

Grambling quarterback Geremy Hickbottom was 14-of-22 passing for 97 yards, throwing two touchdown passes to Lyndon Rash and an interception.

Joseph McWilliams picked off a Derrick Ponder pass and returned it 56 yards for a touchdown to stake Grambling (1-4, 1-2) to a 37-14 lead early in the fourth quarter. Kevin Dominique raced 31 yards for the Tigers’ final score with 8:16 left in the game.

The defensive and special teams touchdowns allowed Valley to win despite totaling only 185 yards of offense. Johnson’s kickoff return TD gave the Delta Devils a 31-20 lead with 12:37 left in the game, after Virginia-Lynchburg had gotten within four points.

Reed threw a 47-yard touchdown pass to Rodney Coates with 16 seconds left in the first half to put West Florida ahead 21-0, then added two more TD passes in the third quarter to make it 35-0.

West Florida doubled up Delta State in total yardage, 439 to 217. The Statesmen were just 3-for-15 on third down conversions, and 0-for-4 on fourth down.

Mississippi College got to within 21-17 with 5:50 left in the third quarter on Detric Hawthorn’s 1-yard touchdown run. But Valdosta State quarterback Rogan Wells threw a 9-yard TD pass to Brian Saunds with 16 seconds left in the quarter, and a 7-yarder to Lio’undre Gallimore with 6:18 left in the fourth to give the Blazers some separation.

Jamar Thompkins finished the scoring with a 1-yard run with 2:38 remaining.

Mississippi College ran for 229 yards as a team. Jaylin Jones led the Choctaws with 51 yards, but six players had at least 30. Hawthorn, the quarterback, had 33 yards and two touchdowns on 12 carries. Hawthorn only completed 2 of 11 passes for 24 yards, however.

Centre College tied the game at 10 on a 34-yard touchdown pass from Clark Payne to Mack Cox with 40 seconds left in the fourth quarter. The teams traded touchdowns in the first overtime, and on the first play of the second Payne was intercepted by Christian Roberts at the 3-yard line.

Millsaps then moved the ball to the 4-yard line and brought on Sellen for the game-winner. Sellen also kicked a 26-yard field goal late in the fourth quarter.

Roberts had eight tackles and an interception for Millsaps, while Liam Vincifora had three sacks and a forced fumble.

Baca’s touchdown to Paul put East Texas Baptist ahead 21-17 with 9:57 left in the third. The Tigers added another touchdown midway through the fourth quarter when Zach Pike recovered a fumble in the end zone.

Baca finished 16-of-26 passing for 247 yards, with three touchdowns and no interceptions. Jalen Blanton and Davion Carter each caught a long TD pass and finished with more than 100 yards receiving.