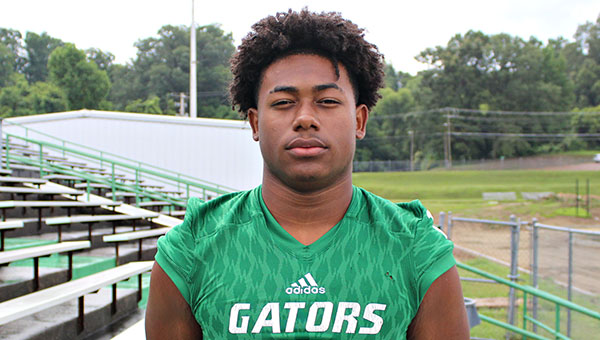 Vicksburg High running back Zyon Scott ran for the team’s only touchdown in a 48-7 loss to Neshoba Central on Friday.

After two close, but encouraging, losses, the Vicksburg Gators had another one that was neither.

Neshoba Central stormed out to a 28-point lead at halftime and went on to beat the Gators 48-7 on Friday night. It was Vicksburg’s fourth consecutive loss, but easily the worst of the three. The last two had been by one and eight points.

Neshoba Central (3-3, 2-0 MHSAA Region 2-5A) rolled up 281 rushing yards as a team and scored 35 points in the first half. Tyler Mathis ran for 155 yards and two touchdowns on 23 carries, while Jarquez Hunter had 90 yards and two TDs on only eight carries.

Vicksburg (1-5, 0-2) finished with 190 yards of total offense. It hit several big plays in the passing game — three of 25 yards or more — but only punched it in the end zone once, on a 6-yard run by Zyon Scott in the first quarter. That cut it to 14-7, and Neshoba Central scored the last 34 points of the game.

Hunter’s 7-yard touchdown run started the avalanche, and the Gators struggled to slow it down.

VHS quarterback Sha’Kori Regan finished 5-of-11 passing for 111 yards, with no touchdowns and two interceptions. He also had 24 rushing yards.

Cedric Phillips ran for a team-high 28 yards on 11 carries for the Gators, while Keveon Smith caught three passes for 80 yards. The Gators finished with just 66 rushing yards as a team and averaged an anemic 2.8 yards per carry.

Vicksburg will return home next Friday to play Cleveland Central (1-5, 0-2) at Memorial Stadium.in a battle of teams seeking their first wins in region play.