Vikings pull away in second half to beat Greenville 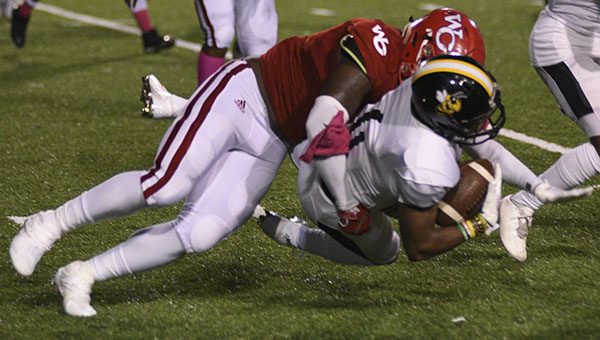 As they came off the field at the end of a first half that was closer than many expected, one of Greenville’s players shouted, “This ain’t the same old Greenville!”

That might be true, but the end result against Warren Central was the same as usual.
Kentrick Thompson ran for 118 yards and two touchdowns, Josh Griffin kicked three field goals, and Warren Central held pesky Greenville at bay in the second half to win 30-20 on homecoming Friday night.

In the second half, Warren Central scored on four of its five possessions and had 111 of its 159 rushing yards. The only drive that came up empty was the last one, when the Vikings had the ball inside Greenville’s 10-yard line as time expired.

“It’s kind of a weird deal. I don’t think we punted once. We kicked way too many field goals. I’m very proud we made them. But we’ve got to score and had plenty of chances to score. Greenville had a lot to do with that,” Warren Central coach Josh Morgan said. “It’s a game where we’re glad to get out of here with a win, and we aren’t going to complain about a win.”

Warren Central (4-2, 2-0 Region 2-6A) beat Greenville (3-3, 1-1) for the ninth consecutive season, and for the 26th time in 27 meetings dating back to 1981.
Greenville, though, gave the Vikings a hard time and earned a measure of respect — as well as a sense it could be a player in the competitive Region 2-6A playoff race before it’s all said and done — in defeat.

Backup quarterback Josh Martin completed 13 of 23 passes for 145 yards and two touchdowns for the Hornets. He played the entire game after starter Ty’Mitchell McCollough was injured on the opening series and did not return.

“I was proud of the kids for fighting, especially the defense staying in the game and fighting. Just watching film from last year, the old Greenville would’ve folded in the second quarter,” Greenville coach Quintarus McCray said. “We’re fighting. We’ve got something to play for. The whole atmosphere of Greenville is different.”

Warren Central did not punt in the game, but could never quite turn a comfortable lead into a blowout victory, either.

The Vikings jumped ahead 14-0 in the second quarter and put the second-team offense in for a series that ended on downs. Greenville took over with 1:28 left in the half and scored, as Martin completed passes of 28 and 27 yards to Simmons — the latter a jump ball at the goal line — to get on the board.

Aaron Coats added a two-point conversion run, and the Hornets went to halftime trailing just 14-8 and chirping about its newfound status of frisky underdog as it headed off the field. Warren Central had outscored Greenville 90-16 in the last two meetings.

“A lot of credit goes to Greenville. They always have athletes and the coaches have done a good job with them,” Morgan said. “On our end, I think our mindset hurt us a little bit. In the first half we missed a field goal, tried to play some younger guys and ended up turning the ball over, and they went and scored and really made the thing a ballgame.”

Warren Central quickly reasserted its dominance on the other side of the break, though.

Josh Griffin finished off a 12-play drive with a 28-yard field goal and Thompson scored on an 8-yard run to give the Vikings a 24-8 lead with 3:20 left in the third quarter. Greenville kept pace, but never got it back to a one-score game.

Martin threw a 20-yard TD pass to Rufino Griffin on the first play of the fourth quarter, but a two-point run by Coats was stuffed. Warren Central answered with a 13-play drive that ended with a 41-yard Josh Griffin field goal.

Josh Griffin kicked another 41-yard field goal with 2:52 left, which set up Simmons’ kickoff return TD to cut it to 30-20. Coats was again stopped well short of the end zone on the two-point try, however. Warren Central recovered the ensuing onsides kick and bled the last 2 ½ minutes off the clock.

“They put a lot of pressure on you, and we’re glad to get out of here,” Morgan said. “We’re where we need to be. We just need to get everybody on the same page and try to be better next week.”