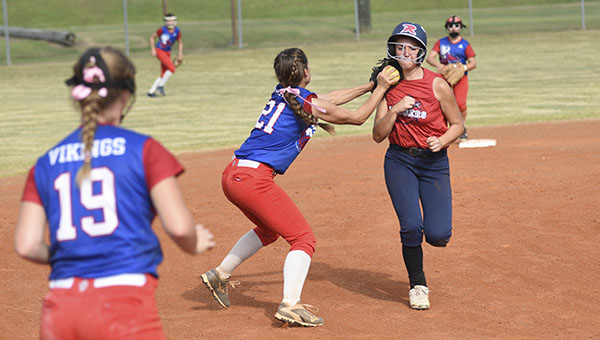 Warren Central rode a rollercoaster on Saturday, but safely arrived back into the station ready to ride again.

The Lady Vikes beat Richland in Game 1 of their first-round MHSAA Class II softball playoff series, lost big in Game 2, and then regrouped to win Game 3 by a score of 6-3 to advance to the second round.

Brianna Daughtry went 3-for-3 with a double, two RBIs and run scored for the Lady Vikes in Game 3. They fell behind 2-0 in the first inning, and scored three runs in the fourth to take the lead for good.

“Stressful,” Warren Central coach Dana McGivney said in summing up the day. “We came out flat the second game and never got in any kind of rhythm. The third game we got back on track and came out on top.”

Daughtry had two hits, and Kallie Page was 1-for-3 with two RBIs and a run scored as Warren Central won Game 1, 7-3. Brooke Comans and Sarah Cameron Fancher each had RBI singles during a three-run fourth inning that put Warren Central ahead, and it added three more runs in the fifth to take a commanding 7-2 lead.

Game 2 went the other way. Richland scored three runs in the bottom of the first inning, then blew it open with four runs in the fifth and five in the sixth to win 12-4. Emily Mcklemurry went 3-for-4 with two doubles, two RBIs and three runs scored for Richland, and Hannah Beggiani drove in four runs.

“Richland hit the ball better in the second game than they did in the first,” McGivney said.

That forced Game 3 and, just as it did in the first two games, Richland scored in the first inning. Two errors and RBI singles by Beggiani and Hailey Thompson staked the Rangers to a 2-0 lead.

Comans hit an RBI single in the second inning to put Warren Central on the board, and then it rallied in the fourth to take the lead for good. A single and an error set up Daughtry’s RBI double, and Kayleigh Karel followed with a run-scoring groundout to put the Lady Vikes in front 3-2. Daughtry then scored on another error for a 4-2 lead.

Two more errors and an RBI single by Daughtry in the fifth inning brought in a pair of insurance runs to make it 6-3. Richland did get two runners on base in the seventh to bring the go-ahead run to the plate, but couldn’t get it done and Warren Central advanced to the next round.

The Lady Vikes (14-15) will go on the road to take on Lawrence County in a best-of-three series Tuesday beginning at 4:30 p.m. All three games will be played on Tuesday.

“We’ve got to cut down on our errors and be more consistent offensively,” McGivney said. “They are one of the better teams in the state. It won’t be easy. We will have to hit the ball well and keep our errors to a minimum to have a chance.”