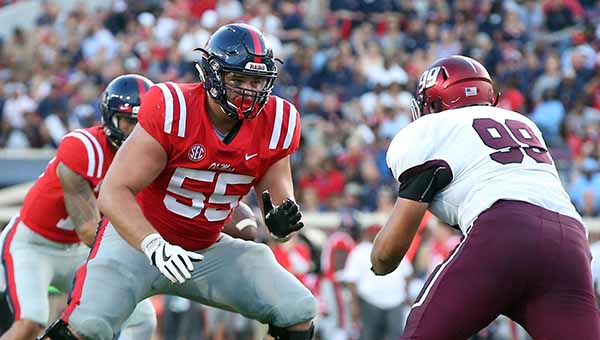 OXFORD — A big day on the ground for Ole Miss led to some leaguewide acclaim for its top rusher and one of the guys who helped make it happen.

Offensive lineman Ben Brown, a former St. Aloysius star, was named the Southeastern Conference’s Offensive Lineman of the Week on Monday. Quarterback John Rhys Plumlee, who led the Rebels with 165 rushing yards in its 31-6 rout of Vanderbilt, was the league’s Freshman of the Week.

Brown, a sophomore, made his 19th consecutive start at right guard and paved the way for the Rebels’ rushing attack. The team ran for 413 yards — its most against an SEC opponent since 1979, and the most against any team since 2010.

The Rebels had three runs of 50 yards or more, including touchdown runs of 78 and 84 yards by Jerrion Ealy and Snoop Conner, respectively. It was the first time in school history that Ole Miss has had two runs of 75 yards or more in the same game.

Plumlee led set an Ole Miss freshman quarterback record of 165 yards and one touchdown on 22 carries. The Hattiesburg native has 274 rushing yards in the last three games while filling in for injured starter Matt Corral.