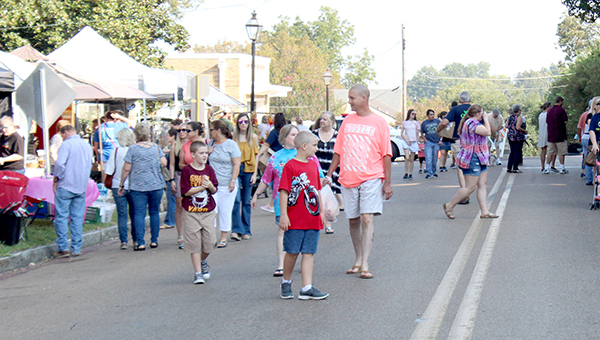 The sun was out, the booths were up, and the visitors packed Cherry and Jackson streets to take advantage of a cool early fall morning Saturday to hunt for bargains at the Old Court House Museum’s semi-annual flea market.

One of those new vendors was Flower Tree Farms from Florence, where Charlie and Susannah Floyd and their family were offering passersby on Jackson Street a taste of their locally-produced honey.

The Floyd’s grandchildren, who Savannah Floyd said help collect and process the honey, were dressed in beekeeper suits to help draw attention to the booth.

“We started slow,” she said of the booth’s sales, “but it’s been picking up.”

Another newcomer was Meagan Grantham and her father Richard Grantham who manned a booth featuring tin men, caboose birdhouses and dip mixes.

“We’ve been doing this for 22 years, but this is our first time to come here,” he said.

Carolyn Flagg Andrews is a regular to the flea market, selling goods marketed by Ellana Boutique, her sister Ella’s store in Chicago.

“I go to all the shows around here,” Andrews said.

“This was a great show,” Bolm said. “We had beautiful weather this time. Rain was a problem for our last two markets, but this time we were able to avoid that. We’ll have another flea market April 25.”