Four Down Territory: Kivett’s completion percentage through the roof; Ole Miss rolling on the ground 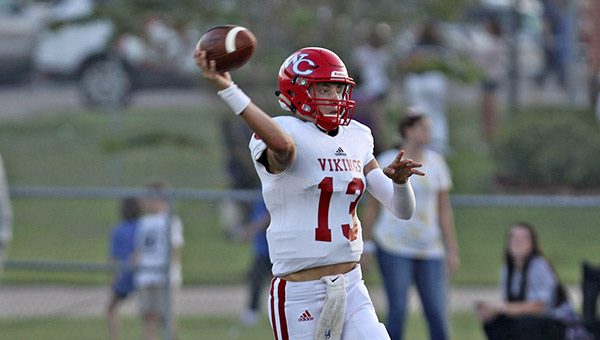 You’re in Four Down Territory. Each week we’ll highlight four notes, stats or trends from the weekend that was in Mississippi high school football, college football and the NFL.

In an era when high-powered passing games are becoming common even on the high school level, Warren Central quarterback Parker Kivett is not putting up jaw-dropping yardage totals or racking up touchdowns. He is, however, helping the Vikings win by being extremely efficient.

Kivett completed 17 of 21 passes for 168 yards, one touchdown and one interception in a 30-20 victory over Greenville on Friday night. Of his four incompletions, one was a dropped pass and another was a desperation heave from the 40-yard line into the end zone that was intercepted on the final play of the first half.

Kivett, a senior, has completed 70.1 percent of his passes this season (61-for-87), which is on pace to be the highest mark for a Warren Central starting quarterback since at least 2011. The previous best in that span was a 59.3 percent rate by Carlisle Koestler in 2013.

Kivett completed his first nine passes against Greenville before the interception. Included in that streak was a 37-yard touchdown to Demond Patton in the first quarter.

Kivett’s yardage total also marked the fourth consecutive game in which he threw for more than 100 yards, after finished with 73 and 65 yards in the first two games. The Vikings are 3-1 in that stretch, as Kivett’s passing has nicely complemented a strong running game.

Warren Central had 203 rushing yards as a team — including 156 in the second half — against Greenville. It was the third time in the last four games they’ve had at least 200 rushing yards.

“Parker did a good job,” Warren Central head coach Josh Morgan said. “We busted on some routes and he had to hold it a little bit too long. But I thought he did a good job. He made some great decisions. He didn’t do anything reckless with the football, which would have been disastrous in this type of game. So I’m very pleased with the way he operated.”

The Ole Miss running game has found its groove the past two games.
After rushing for more yards against Alabama than any opponent in the past eight years, the Rebels piled up 413 yards in a 31-6 win over Vanderbilt on Saturday. It was the most Ole Miss has had against a Southeastern Conference opponent since finishing with 443 against Vanderbilt in 1979.

All four of Ole Miss’ touchdowns came on runs of 20 yards or more — including runs of 78 and 84 yards by Jerrion Ealy and Snoop Conner, respectively — and it averaged 9.4 yards per carry. It was the first time in school history that Ole Miss has had two runs of 75 yards or longer in the same game.

Plumlee was named the SEC’s Freshman of the Week on Monday. Former St. Aloysius star Ben Brown, who made his 19th consecutive start at right guard, was the Offensive Lineman of the Week.

Saturday’s effort increased Ole Miss’ per-game rushing average by 36 yards to 234.3 yards per game, and moved them from 45th in the country to 20th.

The season average is also dragged down a good bit by a poor effort in the opener, when the Rebels only ran for 80 yards in a loss to Memphis. Since then, they are averaging 265.2 yards per game.

“You know, breaking off those two big runs, that really was the difference in the game,” Ole Miss head coach Matt Luke said. “These guys have put in a lot and to see them be happy and to see the smiles on their faces. They know that the hard work is paying off.”

East Mississippi Community College is still one of the top junior college football programs in the country, but it appears to be having a down year by its high standards.

The Lions lost 56-36 to No. 7 Northwest Mississippi on Thursday, for their second loss of the season. It’s the first time since 2012, when they finished 8-2, that the Lions have lost twice in a season.

4
Showing a bit of hospitality might have backfired on Alabama State on Saturday.

Persistent thunderstorms in the Montgomery, Ala., area delayed the start of the game between Alabama State and Alcorn State for four hours, from 2 to 6 p.m. Alcorn head coach Fred McNair said the Braves killed time with a team meal that helped them to a fast start once the game finally kicked off.

Alcorn outgained Alabama State 239 yards to 64 in the first half — including a 156-0 advantage in rushing yards — while jumping out to a 28-0 lead. Alabama State committed turnovers on its first two possessions that the Braves turned into a pair of touchdowns.

“We always talk about ‘no distractions.’ I want to thank Alabama State and its coaches for allowing us to eat in the cafeteria during the delay. That meal definitely energized us,” McNair said. “It’s always tough to get these kids back up after they’re ready to play but can’t. We just wanted to get them back on the field, and get them loose for the first half. We did a great job at the beginning of the game.”