Flashes battle injuries ahead of district game at ACCS 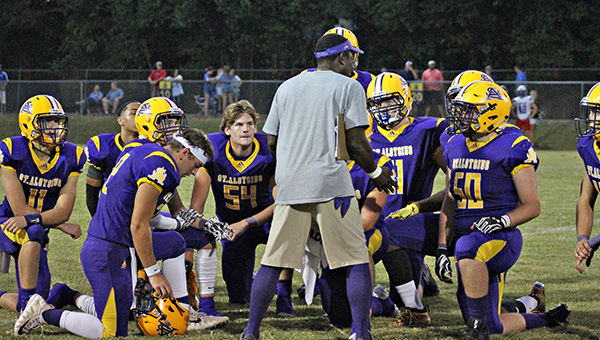 At this point in the season, lots of teams are dealing with bumps and bruises. Some might even have a wave of injuries. St. Aloysius is dealing with a full-on tsunami.

Half a dozen starters did not play in last week’s 36-3 loss to Silliman. A couple of them will definitely miss this Friday’s game against Adams County Christian, and a couple more are day to day and their status is uncertain.

It’s the sort of thing that would be a problem any time. For a team entering the final leg of the season and hoping to make a playoff push, it’s especially troublesome.

“Everything is a concern right now because everything is day to day. It’s just one of those deals where we’ve got a couple of guys playing hurt,” St. Aloysius coach Michael Fields said. “Coaching at a small school you get used to it, but you never really get used to it. You just have to learn to deal with it.”

Two-way lineman Carrington Busari is out for the season with a torn ACL, and quarterback Phillip Upshaw has missed the past four games with a back injury. Among the others who missed some or all of last week’s game were leading rusher Alvin Brown, linemen Ben Raines and Brice Chapman, and linebacker Michael Robinson.

Robinson is the team’s leading tackler, with 49. Brown is the leading rusher with 861 yards and six touchdowns, and was playing quarterback in Upshaw’s absence. Besides missing all of those players, the injuries have forced Fields to move others out of position to fill the gaps and left holes in other places.

Fields said the impact of the injuries was evident when yet another player, center Haden Luke, hobbled off the field against Silliman.

“In the middle of the second quarter our center, Haden Luke, sprained his ankle and had to come out. I called for the second team center and he wasn’t even available because he was hurt,” Fields said. “We had to switch people around and keep rolling.”

Fields added that the effects of the injuries linger on well beyond game day. With fewer players available for practice, and some of the ones that are there a bit gimpy, the Flashes are having to throttle back their intensity a bit.

“We have to be smart about what we do in practice. We won’t practice as long. It’s almost like being a professional team, where they limit what they do,” Fields said.

The rash of injuries is ill-timed. Last week’s loss to Silliman likely ended the Flashes’ chances of winning the MAIS District 3-5A championship, but they’re still in line to earn a wild card berth and have hopes of hosting a first-round playoff game.

To achieve that, they’ll need to beat a solid ACCS team seeking the same thing.
Last year’s Class AAA champion has lost only to Class 6A powerhouse Jackson Prep and Silliman this season. The MAIS power point system that determines the wild card berths and seeding rewards teams for beating opponents with better records and in higher classifications. Both ACCS (5-2, 1-1 District 3-5A) and St. Al (3-4, 2-1) have one game remaining against a lower-classification school among their last three.

As the power point rankings stand now, St. Al and ACCS would meet again in the first round. So Friday’s game could not only help the winner move up in the standings, it could determine home field advantage for a potential first-round rematch.

“That’s what we’re shooting for now. Every win is a plus. We have to get as many power points as we can,” Fields said.