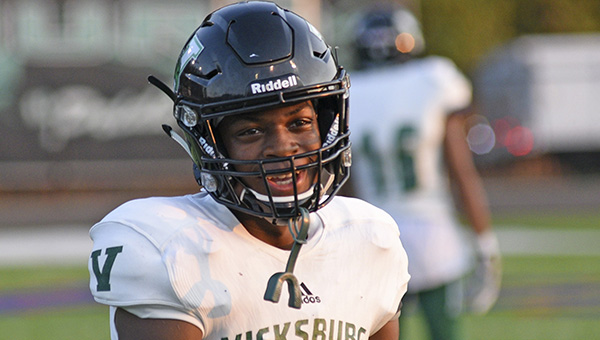 The Vicksburg Gators have arrived at Week 7 of the high school football season at a critical juncture.

There is still time and opportunity to bounce back from a 1-5 start. There’s no more time, however, to mess around.

The Gators (1-5, 0-2 Region 2-5A) host Cleveland Central (1-5, 0-2) Thursday at Memorial Stadium in a battle of teams that have shown flashes of being better than their last-place status indicates. A win would provide a spark to a fading season, while a third region loss would seriously hurt the loser’s playoff chances. So any sort of late-season surge needs to start here.

“A streak is what you’re looking for. We really need to start the streak now,” Vicksburg coach Tim Hughes said. “The reality is, the sooner we can start a winning streak the better off we’ll be. That’s what you want to be able to do. We’ve got two coming to us, and if we can get a win here there’s no reason for us not to be able to say let’s do what we do and get good at what we’re good at.”

Playing a struggling Cleveland Central team might be what the Gators need to get back on track. Both teams have had similar arcs to their seasons as they’ve mixed blowout losses with competitive ones.

Cleveland Central lost by one point to defending Class 6A champion Horn Lake and by 12 to Callaway in its region opener. It has also lost by 20 and 38 to state powers Lafayette and Greenwood, respectively.

Vicksburg was blown out by Class 6A opponents Warren Central and Madison Central — the latter is the top-ranked team in this week’s Mississippi Associated Press poll — while also falling in overtime to Benton (La.) and giving up a fourth-quarter lead to undefeated Provine.

Last week, the Gators lost 48-7 to Neshoba Central in a game that got out of hand early. Neshoba returned a punt and an interception for a touchdown before its offense set foot on the field, then scored on its first snap to go up 20-7. The rest of the game, the Rockets wore Vicksburg down with a dominant rushing attack.

“We gave up maybe two plays that were over 20. There might have been a play that was 10 here or there. Everything else was two, four, six, two. It ended up keeping the offense on the sideline. Defensively, it wasn’t the track meet like last year’s game was,” Hughes said, referring to the 2018 game when Neshoba Central amassed 570 rushing yards. “But when you’re exiting the first quarter and that team has a two-score lead on you, that was what they did the rest of the game. They didn’t have to stretch anything out or get into something they didn’t want to get into.”

The challenge for the Gators this week, Hughes said, is to show some resiliency and find a way to win. They need to snap a losing streak and start a winning one.

“It’s not about the number of times you get knocked down, it’s about the number of times you decide to get back up,” Hughes said. “As long as we decide to get back up, we can look and see that now we’re playing somebody else that’s 1-5. If we can do the things we need to do against them, we’ve got Ridgeland here. And if we do what we need to do against Ridgeland, we can come out of the next two weeks with everything said and done being 2-2 in district.”