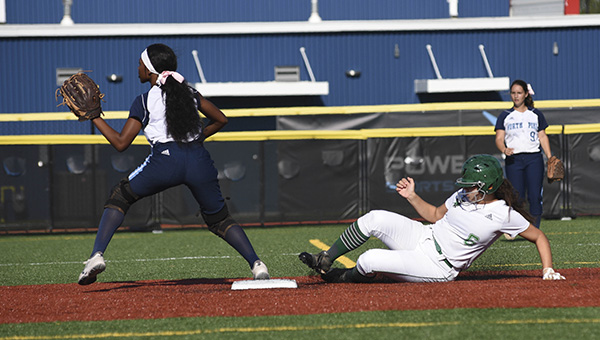 Bridjette Jones-Talbert hit three of North Pike’s nine home runs on the day, and the Jaguars swept Vicksburg 13-2 and 15-2 in a second-round MHSAA Class II slow-pitch series Tuesday at Sports Force Parks on the Mississippi.

Jones-Talbert went 4-for-7 with three home runs, six RBIs and four runs scored in the two games. Kaylea Wagner was 5-for-7 with two homers, three RBIs and five runs scored.
North Pike (18-4) advanced to face Northwest Rankin in the Class I quarterfinals on Thursday.

Vicksburg, which won the Region 5 championship, only trailed 3-2 after the first inning in Game 1. Everything after that, however, did not go very well.

After Sha’Niya Lockridge hit a two-run homer in the bottom of the first inning, 12 of Vicksburg’s next 15 batters were retired. The Missy Gators also committed seven errors.

The lack of offense and miscues in the field allowed North Pike to pad its lead, and it finally blew the game open by scoring eight runs in the last three innings to win 13-2.

North Pike’s momentum carried into Game 2, as well. It scored six runs in the bottom of the first inning, five more in the second, and finished the game and series in four innings via the mercy rule, 15-2.

Wagner, Jones-Talbert and Sydney Williams hit consecutive home runs in the first inning.
Trinity McGloser was 2-for-2 with an RBI double for Vicksburg, and Jamie Ward also hit an RBI double. Elyah Walker and Charli VanNorman each had two hits and scored a run.

The Lady Cougars scored seven runs in the second inning of Game 1 and went on to win 17-1, and then scored 12 runs in the first three innings of Game 2 en route to a 16-4 victory and second-round series sweep.

Lawrence County (19-4) advanced to the quarterfinals and will face Wayne County on Thursday.

Skyler Speights went 5-for-7 with three home runs, seven RBIs and six runs scored in the series. She hit two homers in Game 1, including a three-run shot during the second inning that put Lawrence County in control.