Vikings tangle with No. 1 Madison Central 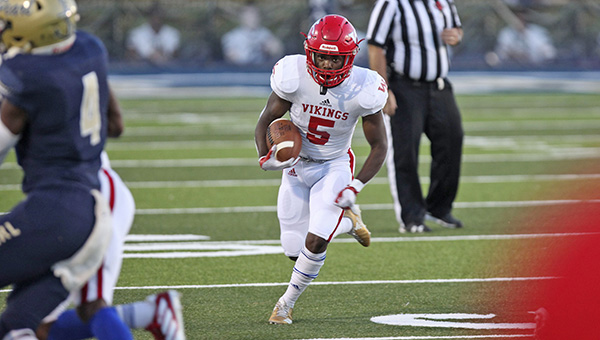 Warren Central's Kentrick Thompson (5) runs with the football. Thompson leads the Vikings with 335 rushing yards and four touchdowns as they hit the road Thursday to play No. 1 Madison Central. (Courtland Wells/The Vicksburg Post)

Each year, the showdown with Madison Central is perhaps the most anticipated game on Warren Central’s schedule. This time, they’re not even waiting for Friday night to play it.

The Vikings and Jaguars will play a day early, Thursday at 7 p.m., at Madison Central. The game was moved up 24 hours from its originally scheduled time because of the threat of severe weather on Friday night.

Warren Central coach Josh Morgan said the abrupt change — the decision to move the game was not made until around noon Tuesday — accelerated his team’s preparation.

“Based on the forecast, we’re trying to eliminate any possible conflict. There were some games last week that had weather and didn’t finish until Monday. It’s not that big of a deal. Just a change in the routine,” Morgan said. “You just have to do a good job of really cramming and prepare the best you can, and try not to overlook stuff.”
One thing the Vikings (4-2, 2-0 Region 2-6A) certainly are not overlooking is the quality of this Madison Central team.

The Jaguars (6-0, 2-0) are the top-ranked team in the Mississippi Associated Press Class 6A and overall polls, and have earned that honor on the field. Two of their six wins have come against No. 2 Brandon and No. 5 Pearl, and they’re the last undefeated team in Class 6A.

Madison Central has not won the Region 2-6A championship since 2013, but has reached the Class 6A semifinals nine times in the last 11 years. Led by quarterback Jimmy Holiday, the 2019 Jaguars seem capable of ending the former streak and continuing the latter.

Holiday has completed 68.1 percent of his passes this season for 568 yards, with six touchdowns and no interceptions. He’s also run for 661 yards and 10 touchdowns. Running backs Duke Arnold (303 yards, four touchdowns) and Javarius Johnson (331 yards, three TDs) complement him on offense, while the defense is allowing just 9.5 points per game.

“They’re a very good football team. They probably have the best player in the state, the best defense in the state, and they have played a really tough schedule. To be standing there at 6-0 is really impressive,” Morgan said. “It’s a tough task. We’re going to have to play very well and have some things go our way for sure.”

Madison Central has won four in a row in the series with Warren Central, and 13 of the last 15. What makes this such an anticipated game each year, however, isn’t the stakes — first place and the inside track to the Region 2-6A championship is on the line — or the chance to knock off the No. 1 team in the state. It’s a tradition of close, memorable games.

Seven of the last eight meetings have been decided by a touchdown or less. In the last three, the winning points were scored in the final minute of regulation or overtime.

Morgan said knowing the Vikings can go toe-to-toe with Madison Central is an asset, but cautioned about relying on it entirely. After all, he pointed out, they had a similar history of close games with Pearl and lost 42-0 when they played them in August.

“You have to be careful with that, too. Us and Pearl was always a close game and you saw what happened there,” Morgan said. “It’s year in and year out, and we’ve both been fortunate to have good teams.”

A better thing to count on, Morgan added, is the way Warren Central has been playing since that loss to Pearl. It has won three of four games since then, with the loss a one-point defeat at Brandon.

The Vikings have rushed for more than 200 yards in all of those recent victories. During the four-game stretch they’re averaging 29 points and 369 yards per game. In the first two games of the season they had 429 yards and scored 13 points combined.

Warren Central is clearly a team trending upward, and ready to make a statement that it belongs in the upper echelon of teams in the toughest region in Class 6A.

“We’ve gotten better. We’re not the same team as in Week 2, and that’s a good thing. We have a long way to go and short time to get there. It’s a really big game,” Morgan said. “We know our identity and have established how we want to play. We have to be as prepared as we can and give it everything we’ve got — not just this week, but moving forward.”