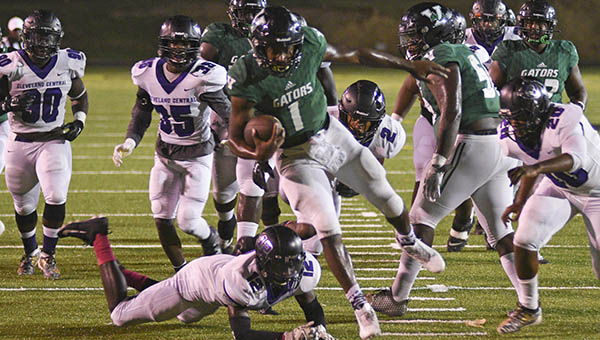 All too often, the Vicksburg Gators had opportunities to get Cleveland Central off the field or inflict some damage. Each time, it seemed, the Gators did something to let them off the mat.

Special teams blunders. Penalties. Third- and fourth-down conversions. Their own missteps on offense.

It was all a toxic cocktail of mistakes that the Gators could not overcome.
Terry Winston rushed for 125 yards and three touchdowns, Latravious Miller threw two touchdown passes, and Cleveland Central beat Vicksburg 34-24 Thursday night at Memorial Stadium.

Cleveland Central (2-5, 1-2 Region 2-5A) ran for a season-high 307 yards and converted 5 of 7 third- or fourth-down chances in the first half. Manny Tyler added 113 yards on 12 carries, and set up a scoring drive with a long punt return.

“It’s that confidence on finishing something, on fitting the right way and being consistent on what we do,” Vicksburg coach Tim Hughes said. “They didn’t do anything different to us. There was a lot of stuff there, and a lot of it had to do with they got momentum. And when you start feeling it, you’re feeling it. We had to figure out how to make that momentum flip. They competed all night long. The kicking game was there. We hit a field goal and every extra point. We just have to get some stops defensively.”

The loss was a difficult one for Vicksburg (1-6, 0-3), not only because it was a winnable game but because it put them in an undesirable situation in the bigger picture. With an 0-3 record in Region 2-5A, the Gators will likely need to win their last four games to qualify for the MHSAA Class 5A playoffs.

“It’s tough. But life’s tough. That’s what I’ve got to preach to these kids. Things are going to happen and you’re going to be put in really bad situations, and this is a chance to show what kind of character you have,” Hughes said. “This is a chance as a coaching staff where we get to show what kind of character we have. We’re not going to give up on these kids. We know we’re a program that’s building and trying to make something happen now and eventually down the road. You’ve got to establish this kind of mentality right now. We’re down. We’ve got to get back up. If we’re worth our salt, then we’re going to get right back up and try to go get a win.”

Vicksburg came out ahead in an early exchange of scores, taking a 10-7 lead in the second quarter on a 7-yard touchdown run by quarterback Sha’Kori Regan. Cleveland Central then broke serve and took control with two touchdowns and the first of three crucial special teams plays in the game.

Miller’s 15-yard TD pass to Marcus Franklin put the Wolves back in front — and was their first pass of the game after 20 consecutive runs — with 6:29 left in the second quarter.
Vicksburg then faced fourth-and-10 from the Cleveland Central 42 on its next possession and elected to punt. The kick was blocked, the Wolves recovered it all the way back at the VHS 30-yard line, and they cashed in with a five-play scoring drive finished off by Winston’s 1-yard run.

The Gators responded with a 4-yard TD run by Regan on their next possession and went into halftime down 21-17, but from then on they were playing catch up.

Cleveland gained some separation by scoring on each of its first two possessions in the second half. Miller tossed a 9-yard touchdown pass to Robert Dudley and Winston scored on a 15-yard run to put the Wolves ahead 34-17 with 3:07 left in the third quarter.

The first drive was kept alive by a roughing the kicker call on a punt. The second was set up by a 32-yard return by Tyler that gave the Wolves the ball at the Vicksburg 23.

“We made the adjustment and ended up getting a three-and-out, and we end up being a little overzealous trying to make something happen and turn the momentum,” Hughes said. “Like I’ve said before, when you’re not a team that knows how to win yet you can’t do those things because it’s just a momentum flip.”

The Gators did get a score back in the fourth quarter, on a 6-yard run by Cedric Phillips, but couldn’t get any closer. Two second-half possessions ended on downs, including one at the Cleveland Central 25-yard line.

Phillips finished with 153 rushing yards and a touchdown on 14 carries. Regan ran the ball 16 times for 77 yards and two touchdowns, but was only 6-of-15 passing for 50 yards.

“What they wanted to do was run the ball anyway. All of a sudden you’ve got an uphill climb and you know the clock’s about to start going,” Hughes said. “When you know how to finish a game and go win a game, those mistakes aren’t made. You know they’ve got to make stuff happen. We’ve got to change that. We’ve got to be different than that.”