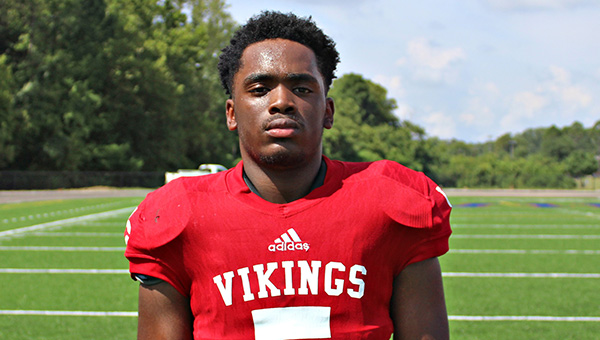 Warren Central running back Kentrick Thompson ran for 76 yards and a touchdown in Thursday’s 28-7 loss to No. 1 Madison Central.

MADISON — It was going to come down to who could establish a consistent running game.
Madison Central was able to do that, and Warren Central was not.

Behind the duo of quarterback Jimmy Holiday and running back Duke Arnold, top-ranked Madison Central ran past Warren Central 28-7 on Thursday in a huge matchup of unbeaten teams in Region 2-6A.

Warren Central (4-3, 2-1) will host Murrah as it tries to stay on track for a playoff berth.

“Madison is a very good football team and I’m proud of our kids for the way we competed and the way we fought,” Warren Central head coach Josh Morgan said. “Didn’t get off to the start we’d like with the missed field goal, and then they used the entire of the rest of the quarter on their first drive and scored.”

The Vikings got the ball to start the game and drove to the 6-yard line. Then three straight negative plays backed them up to the 17 and kicker Josh Griffin missed a 27-yard field goal with 7:41 left.

Madison Central’s ensuing possession took up the rest of the opening quarter and then some. The nearly 10-minute drive ended with a 3-yard touchdown pass from Holiday to Blake Gunter that put the Jaguars up 7-0 with 10:09 left in the second quarter.

The Jaguars later scored on a 10-yard pass from Holiday to Luke Robertson with 1:09 left to lead 14-0 at halftime.

To open the second half, Holiday scored on 29-yard run to extend the lead to 21-0 with 9:33 left in the third quarter.

Warren Central got on the board with a 46-yard touchdown run by Kentrick Thompson to cut it to 21-7 with 6:19 left in the third quarter.

Madison Central answered, though, with Holiday’s 55-yard touchdown run with 4:24 left in the third quarter to make the lead 28-7.

That was how it ended, and broke a recent trend in this series. This was the first meeting between the teams since 2016 in which the winning points were not scored in the final minute of regulation or overtime, and the first one since 2012 that was decided by more than 10 points.

“That was probably the most complete game of the year for us in all phases. We got the running game going for us and that was important,” said Madison Central coach Anthony Hart. “Got a lot of respect for Warren Central. They play us good and are a really good football team with a lot of fight in them. They’re young so the next two years they will be really good.”

Thompson led Warren Central’s rushing attack with 76 yards and a touchdown on 17 carries. Quarterback Parker Kivett was 10-of-18 passing for 141 yards.

“They were consistently moving the chains and would get three or four yards and we would make plays in spots,” Morgan said. “Every week is a dog fight in this region and we got to put this one behind us and continue to get better.”