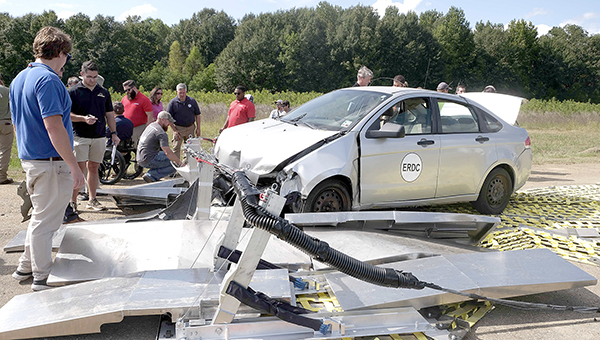 It’s an unusual looking contraption; a set of what appears to be a series of metal speed bumps topped with about a 3-foot tall arm-type gate of metal tubing preceded by a cargo net over metal.

The Aggressor Vehicle Entry Readiness Technology, or AVERT, as it’s known to the engineers at the U.S. Army Engineer Research and Development Center who designed it, is a lightweight barrier designed for the Army to stop the bad guys from driving their vehicles onto remote military bases.

And it is beginning to attract interest in the civilian world.

Christopher Price, chief of the Technical Engineering and Geoscience Branch at ERDC and one of AVERT’s developers, said it was developed for use by the military for security at small base camps, entry points and remote checkpoints.

“It’s something that doesn’t require a traditional construction effort where you’re going in and building a foundation; a permanent vehicle barrier,” he said. “This is something you can set up in 15 minutes to protect areas from known threats.

“Vehicle IEDs (improvised explosive device) were the reason it was really designed for the Army,” he said.

Josh McCleave, associate technical director of military engineering at ERDC’s Geotechnical and Structures Laboratory and another of AVERT’s developers, said the key feature of the barrier is its modular design.

“It comes in 2-foot sections that can be added without any tools,” he said. “You can lengthen that barrier to go across whatever lane or road width you need for whatever application. It’s adaptable to any situation.”

The equipment doesn’t have to be anchored; “you don’t have to put augers in the ground or tie it to a large mat,” Price said.

The mat sitting in front of the barricade is made of a nylon cargo net with an aluminum base that allows friction to affect the vehicle when it hits the barrier.

“The friction is what stops it,” he said. “The heavier the vehicle, the more friction; the tires aren’t actually touching the ground.

“That is why the mat is out further, so even a large vehicle has no traction on the ground anymore. All of that weight is added to the entire vehicle barrier system; we’re using the weight of the vehicle itself to stop it.

Another feature of the barrier system, McCleave said, is it can be lowered “so cleared vehicles can pass; they can drive over the deck plates to drive into the venue. It’s a string of barriers you can articulate down or up with minimum personnel, and they don’t have to be particularly trained, either.”

Price said it has taken several years to develop the system to its present configuration, adding ERDC developed a partnership with the Vicksburg Municipal Airport that allowed engineers to test prototypes on an isolated road on airport property off Warrenton Lane. The project engineers and technicians were on Warrenton Lane Wednesday testing the system.

“It’s been very, very helpful to come here and do that at no cost to the government,” Price said. “We’ve been able to test a lot of versions over the last three years.”

Price said the engineers have also been able to use computer models to run tests, “This is an improved design that uses government-patented components, so the entire system is government-owned patents; actually three patents for various components, but none of the components are exotic,” he said. “All the components are pretty straight forward — high strength aluminum, machined steel components, cargo net with an aluminum skid plate underneath.”

The work on AVERT has caught the attention of the civilian sector, Price said, because of its security applications.

Homeland Security, private industry, universities and other organizations are investigating ways to use the technology for events like major sporting events, big concerts and presidential visits.

“This is something you can throw out of the back of a pickup truck or a crate and set it up in 15 minutes,” Price said.

“The driver for us was Army requirements for an expedient barrier in the middle of nowhere for base camps that can be quickly deployed and can actually stop a vehicle more so than spike strips across the road,” he said. “Spike strips will work, but you can run a long way on a flat tire.”

McCleave added, “Even a determined terrorist is not going to push their way through to the arm.”

“It looks like a fairly high tech solution,” Price said, “And in some ways it is, but the technology here is all interchangeable parts — fairly simple; you’re talking about pulleys and integrated springs, nothing you can’t swap out pretty quickly.

“The other feature is all the barrier system can be put together without any tools.”

McCleave said a team of three people headed by ERDC research engineer Justin Roberts, another engineer involved with AVERT, installed it in 15-16 minutes.

As interest has shifted from military to civilian requirements, Price said, “We have tried to be responsive to that and make things that are lighter weight, easier to put together.”

And that includes developing ways to use off-the-shelf components that reduce the overall cost.

Price said he, McCleave and Roberts are working with ERDC’s Office of Technology Transfer to make the transition to the civilian market.

“It was an ERDC patented design that is now being licensed to private companies that are able to produce and get in the hands of people to use it,” he said.