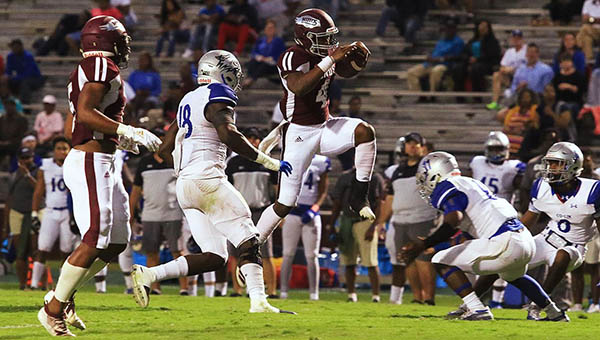 RAYMOND — This is quickly turning into a heck of a year for Hinds Community College’s football team.

Elijah Walker completed 20 of 28 passes for 217 yards and three touchdowns, and Don Ragsdale added 100 yards and two touchdowns on the ground as the sixth-ranked Eagles beat Copiah-Lincoln 35-21 on Thursday for their fourth consecutive victory.

Hinds jumped out to a 14-0 lead on Co-Lin as Walker hit Javon Antonio for a 23-yard touchdown and Ragsdale scored on a 1-yard run in the first quarter.

The teams traded scores in the third quarter until Walker hit Traveyon Craig for a 37-yard touchdown pass with 3:28 left to give Hinds a 35-21 lead.

The defense, which registered six sacks — two each by Amos Robinson, Jaylen Heffner and Chris Blair — locked it down from there.

Hinds goes on the road next week to play East Central Community College in a big MACJC South matchup. It then finishes the regular season at home against No. 1 Mississippi Gulf Coast.

Co-Lin (3-4, 1-3 MACJC South) lost its fourth consecutive game. The last three have been against teams ranked in the top 10 of the NJCAA national poll.

Danny Clark completed 20 of 32 passes for 281 yards and two touchdowns for Co-Lin, but the Wolves had 16 rushing yards as a team.

It was Holmes’ first win over the defending NJCAA national champions since 2005. It has also beaten No. 2 Northwest Mississippi this season and is in control of its fate for the MACJC North championship.

Dylan Kelly ran for 118 yards and two touchdowns on only 10 carries for Holmes.

Martavius Dill broke off a 66-yard TD run and Kelly a 50-yard TD run to give the Bulldogs a 49-42 lead near the end of a back-and-forth game.

The Bulldogs ran 50 times for an average of 5.2 yards per carry. Bolton averaged nearly 7.5 a pop.

The Bobcats totaled 334 rushing yards and averaged 8.1 yards per carry.

Jones quarterback Fred Barnum, a former Warren Central star, was 11-of-22 passing for 100 yards, with one touchdown and one interception.

Northeast Mississippi finished with 190 yards of total offense and its three quarterbacks were sacked six times.