Porter’s Chapel still has a lot to play for 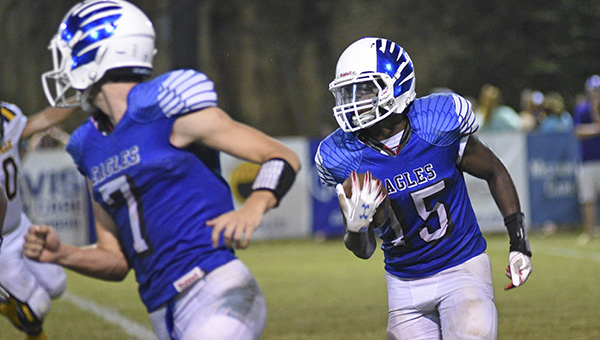 Porters Chapel Academy’s Tyler Washington (15) runs with the football earlier this season. Washington and the Eagles will go on the road to play Greenville Christian in their District 4-3A opener on Friday night. (Courtland Wells/The Vicksburg Post)

It’s not that the first seven weeks of the season meant nothing for Porter’s Chapel Academy. It has ironed out some kinks, won a couple of games, figured some things out.

It’s just that the part of the season that matters most is just now starting.

The Eagles go on the road Friday night to face Greenville Christian in their District 4-3A opener. It’s the first of three consecutive district games to finish the season, which means there’s still a plausible path to the playoffs and even a district championship despite a 2-5 record.

“We still have a whole season to play for. We still have a chance at the playoffs and to win the district, as crazy as it sounds,” PCA coach Blake Purvis said. “It’s going to be a tall task, but nonetheless it is still possible and attainable. It helps when you are down a little bit that you have something to play for instead of just playing three games. The psyche and everything is better when you have a goal that’s still attainable.”

To win the district title it would need to win all three games, including the finale against undefeated Greenville-St. Joseph (7-0, 2-0 District 4-3A), a two-time defending state champion ranked third in this week’s Associated Press MAIS poll. The other two games are against Greenville Christian (3-4, 0-1) and Glenbrook (4-2, 0-1).

On the bright side, PCA (2-5, 0-0) is in second place by virtue of not yet having played a district game and still controls its fate. It’s also had some modest success with a mid-season change in offensive strategy.

PCA has run for 171 and 153 yards in its last two games, and had 100-yard rushers in both while throwing a total of nine passes. The change was necessitated by an injury to starting quarterback Luke Yocum, but has also worked for a team suffering from some attrition to a thin roster.

Running back Tyler Washington had 135 yards and a touchdown on 23 carries in a 26-12 win over New Orleans Home School last week. He has gone over the 100-yard mark twice in the last four games.

“I’m really hoping we can continue to run the ball and keep their offense off the field, and control the clock. That’s going to be a big part of whether we have success or not,” Purvis said, before adding some praise for his offensive line. “Our offensive line has stepped up and no doubt improved from earlier in the year. Some of that is being more confident. At the beginning of the year we had four new guys on the offensive line. Two of them have only been here three weeks.”

Purvis also said John Michael Wilkerson has done a good job transitioning from wide receiver to quarterback. Wilkerson is actually the third-string quarterback — Braden Kapp initially took over for Yocum, but was injured in the first quarter of his first start against Centreville Academy — and has had two effective games.

Wilkerson ran for 104 yards and a touchdown against Centreville, and accounted for three touchdowns against New Orleans Home School. Wilkerson only had 16 yards rushing and 30 passing, on seven carries and five pass attempts, against New Orleans. He ran for two touchdowns, however, while throwing a touchdown pass and completing another big pass on third down to keep a scoring drive alive.

Wilkerson’s performance in the second half helped PCA regroup after blowing most of a 14-point lead.

“Losing Luke, we had to change our offensive scheme. John Michael has stepped up big-time,” Purvis said. “He played every snap at quarterback and really excelled. He didn’t do anything flashy, but he did account for three touchdowns and managed the game very well.”