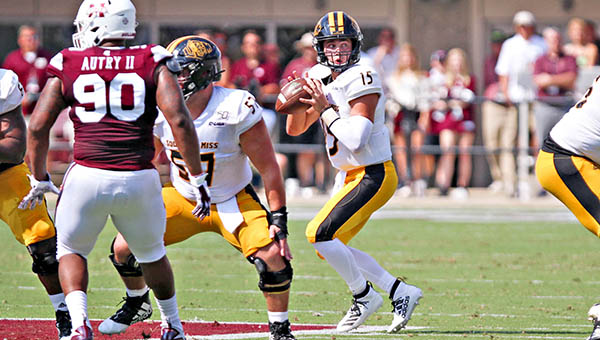 Earlier this year, when they were both attending the Manning Passing Academy in Louisiana, North Texas quarterback Mason Fine said he struck up a friendship with his Southern Miss counterpart Jack Abraham.

“We hung out quite a bit and became friends. When I’m a fan watching football, I like what he does and their offense does,” said Fine, a senior who is the Football Bowl Subdivision’s active leader in passing yardage with 10,708.

This weekend, however, the friendship is on hold. It’s all business for both quarterbacks and their teams.

Southern Miss (3-2, 1-0 Conference USA) welcomes North Texas (2-3, 1-0) to Hattiesburg on Saturday night for a key game in Conference USA’s West Division, and one that could showcase both teams’ high-powered offenses.

In each of the past six meetings between the teams, the winner has scored at least 29 points and the loser has never reached that mark.

“They are a balanced football team. They can run the ball and, of course, with Mason, he throws the ball extremely well,” Southern Miss coach Jay Hopson said. “He is a dual-threat guy. He is a guy that is the C-USA Preseason Player of the Year, so if you do not have respect for him, you are crazy.”

Hopson added that with so much emphasis on the offense of both teams, it makes sense that the outcome will probably be decided by which defense plays the best.

Although both teams are entering the game with modest records at the midway point of the season, their respective schedules have a lot to do with it.

Among North Texas’ three losses are defeats to SMU and California, who have both spent time in the Top 25 this season. Southern Miss has lost on the road to two Southeastern Conference teams, Mississippi State and No. 1 Alabama.

In many ways, both Hopson and North Texas head coach Seth Littrell said, this is the first truly accurate test of how they’ll stack up inside the conference.

“They are a team that has our respect. They have had three tough losses, but to three good football teams that they have played,” Hopson said. “We know this is a big conference game. It is no surprise to us, we know they are a good football team and records do not mean anything.”

The two games against Mississippi State and Alabama have broken up the schedule and kept the Golden Eagles from establishing any sort of offensive flow from week to week.

Against teams not in the SEC, however, Southern Miss is 3-0 and averaging 38.7 points per game. It had a season-high 168 rushing yards in a 31-13 win over UTEP last week.
The Golden Eagles rank 13th out of 14 teams in Conference USA in rushing offense, but have been effective enough with it to complement Abraham’s passing.

The highest rushing total by any one player this season is 65 yards by Kevin Perkins against UTEP. USM, however, has totaled at least 96 yards as a team in four out of five games.

“They (running backs) are doing well. When we have needed positive yards, they have done an outstanding job. De’Michael (Harris) and (Kevin Perkins) are guys that have really done a great job running the football. They are kind of a one-two punch,” Hopson said. “Certainly when you look at Steven (Anderson) and guys like Darius (Maberry) and some of those guys, we have good depth there and we have backs that can do things with the football.

“I have been pleased with the running game, I really have,” Hopson continued. “When we have needed to run the ball, we have run the ball. We just have to keep doing that and getting better every week.”