ACCS scores 34 points in first half on way to rout of St. Al 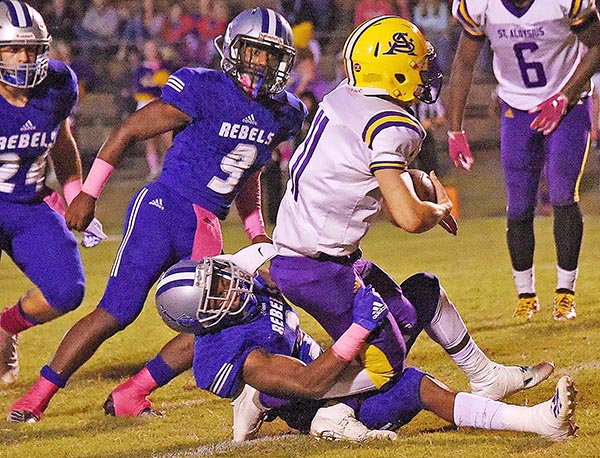 Adams County Christian School's Decobus Jackson brings down St. Aloysius’ Kieran Theriot (11) during Friday night's game in Natchez. Theriot threw a touchdown pass in the first half, but ACCS scored the first 34 points of the game and beat St. al 40-23. (The Natchez Democrat)

NATCHEZ — A fast start and a powerful running game propelled Adams County Christian to a big win over St. Aloysius on Friday night.

Six different players scored rushing touchdowns for the Rebels, who finished with 256 yards on the ground and won 40-23.

The Rebels jumped out to a 34-0 lead late in the first half and then kept the Flashes at a safe distance in the last two quarters.

“Each week it becomes apparent that we’re not effective as we have been in the past throwing the football,” said ACCS coach David King. “We really concentrated on the fact we have to run the football. We’re getting better at it each week because that’s what we are forced to do.”

Claven Dunbar ran the ball eight times for 45 yards and scored a 5-yard rushing touchdown. Dunbar said he came onto the field with a mindset set on winning.

Wes Stockstill and Blake LePrairie led ACCS’ defense with an interception each, and Rhett McDonald had seven tackles.

St. Al did not get on the scoreboard until Kieran Theriot threw a 50-yard touchdown pass to Trinye Brown with 57 seconds left in the first half. That made the score 34-7 at halftime and seemed to give the Flashes (3-5, 2-2) some life at last.

Blake LePrairie scored on a 20-yard in the third quarter for ACCS, but St. Al scored the last 16 points of the game — all in the fourth quarter.

A bad punt snap by ACCS resulted in a safety on the first play of the fourth quarter. Ben Ulery scored the Flashes’ second touchdown on a 2-yard run and, with 1:55 left in the game, Brennon Williams scored on a 17-yard run to make it 40-23.

“Our players didn’t quit, and they just played hard,” St. Al coach Michael Fields said. “As long as the kids don’t quit, that’s all we can be proud of.”

St. Al suffered its second consecutive blowout loss to a District 3-5A opponent — it lost 36-3 to Silliman last week — and had any slim hopes of winning the district championship come to a definitive end.

The Flashes will try to bounce back next week when they host Washington School for homecoming, as they try to secure a wild card berth in the MAIS Class 5A playoffs over the last two weeks of the season. The last two games are both at home, next week vs. Washington and Oct. 25 against Cathedral.