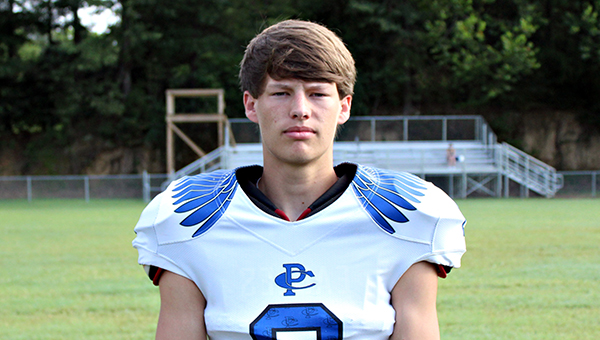 Porter’s Chapel Academy defensive back Michael Tod Andrews had an interception Friday against Greenville Christian, but the Eagles lost 56-0.

GREENVILLE — The Greenville Christian School Saints went marching into — and right on through — their homecoming game Friday night, shutting out Porter’s Chapel Academy 56-0.

The Saints scored 37 unanswered points in the first half, including 21 in the second quarter. Antonio Moore and Lawson Stokes scored two touchdowns apiece for Greenville Christian (4-4, 1-1 MAIS District 4-3A), which won its fourth consecutive game.

“I feel like the closer we’ve gotten as a group, the more it’s contributed to us playing really good football week to week,” Greenville Christian coach Jon Reed McLendon said.

The Eagles were plagued by turnovers and the Saints capitalized on a great many of them.
On their first offensive drive, the Eagles turned the ball over on downs, unable to convert a fourth down after a few solid rushing attempts by junior running back Tyler Washington.

PCA got the ball right back with an interception by Michael Tod Andrews, but the offense went three-and-out again.

Stokes then scored on a short pass and Keenan Howard ran in the first of several two-point conversions to put the Saints up 8-0.

Early in the second quarter. JaMichael Short caught a 35-yard pass to set up his own 17-yard TD reception, and the two-point conversion made it 24-0 with 8:40 left.

Stokes broke a 44-yard touchdown run with 7:28 to go, and a minute later Keenan Howard stripped the ball from a PCA runner deep in Eagles territory. Howard’s forced fumble led to a 5-yard touchdown run by Moore and a 37-0 lead for Greenville Christian at halftime.