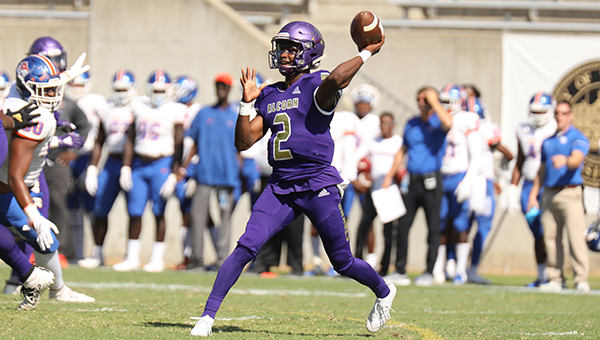 LORMAN (AP) — Alcorn State’s backup quarterback continued to prove he can thrive just as well in the starting job.

Harper, a junior who became the starting quarterback when Noah Johnson was injured earlier in the season, completed passes to five receivers, four of whom scored touchdowns. Anthony had one touchdown, Chris Blair two and LeCharles Pringle two.

Harper improved to 4-0 as the starter this season and has passed for 1,146 yards with 16 touchdowns and no interceptions since Johnson was injured. He was 16-of-21 for 324 yards on Saturday.

“I just want to first thank God for giving me this opportunity, but also my coaches. The offensive line gave me time to get to my playmakers, my receivers, who made me look good at the end of the day,” Harper said. “Coach McNair and (quarterbacks coach Pat) White tell me every day ‘the way you practice is the way you play,’ so I take practice very seriously. It’s been competitive for the past few weeks at practice, and that’s paid off in the games.”

Savannah State (3-3) trailed 21-3 in the second quarter before closing the gap to 21-17. First, the Tigers scored on a 15-yard pass from D’Vonn Gibbons to Cameron White. Then, on Alcorn State’s next play, Harper was sacked and his fumble was recovered by Cam Brown in the end zone.

Harper hit Blair for a 24-yard score and Alcorn State (5-2) led 28-17 at halftime. In the third quarter, Harper and Anthony connected for 84 yards and Trey Turner had a 3-yard TD run to cap the homecoming win.

“We have to do our job. We have to ‘cut our own grass’ and we knew we had to stop the run,” said Alcorn safety Keyron Kinsler, who led the team with 10 tackles. “I think we came out and we executed well in the second half more so than the first half and we found a way to win.”

Ezra Gray and Jacory Merritt each rushed for 69 yards for the Hornets. Gray had a 13-yard TD run on Alabama State’s first drive of the game.

Jett Even’s 10-yard keeper made it 14-3 in the second quarter. Jackson State cut the deficit to 14-10 before halftime on Derrick Ponder’s 20-yard TD pass to Terrell Kennedy III.

Ponder passed for 164 yards, two touchdowns and an interception for Jackson State.

The Delta Devils recovered from an opening-drive interception and forced Arkansas-Pine Bluff (5-2, 2-1 SWAC) to punt after a nine-play, 50-yard drive. Dejerric Bryant ran for a 28-yard score, the two-point conversion failed, and Mississippi Valley State (1-5, 0-2) held its only lead of the day.

The Golden Lions proceeded to score three touchdowns on their next four possessions and led 21-6 at halftime. Porter made it 7-6 on a 4-yard run at the end of an eight-play, 75-yard drive. Patrick followed with a 32-yard TD pass to DeJuan Miller and, just before intermission, found Tyrin Ralph for a 17-yard TD pass.

After 1-yard end zone plunge made it 28-6 late in the third, following an MVSU pick, Patrick connected with Josh Wilkes for a 56-yard TD pass and a 35-6 lead.

Jarius Clayton lead the Delta Devils with 77 yards rushing on six carries. The Golden Lions held Bryant to 8-of-19 passing for 80 yards and picked him off three times.

Southwestern 31, Belhaven 21
Nicholas Smith threw for touchdown and ran for anotther, and Devin Shaw ran for 116 yards and a touchdown to lead Southwestern University (3-2, 2-2 American Southwest Conference) past Belhaven (1-5, 1-4).

Foley finished with 36 rushing yards and two touchdowns on 10 carries. Belhaven quarterback Hunter McEachern completed 20 of 32 passes for 249 yards and one touchdown, and also ran for 68 yards. LaMarcus Cardine caught six passes for 125 yards and a touchdown.

Evan Powell added 117 rushing yards for Austin College. Collins, the quarterback, was 14-of-37 passing for 216 yards, with no touchdowns and two interceptions.

Millsaps had 199 yards of total offense. The Majors had 11 first downs compared to 34 for Austin College, and held the ball for 19 minutes and 12 seconds while the ‘Roos had it for more than 40 minutes.