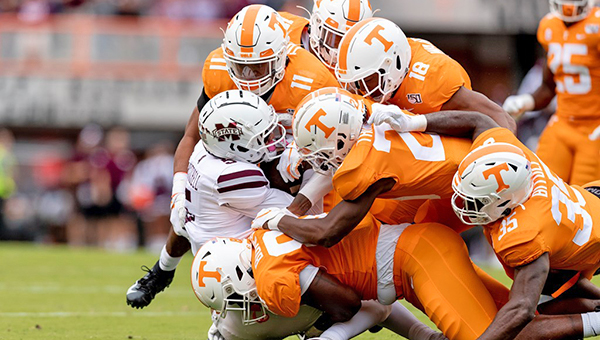 The Volunteers intercepted three passes, shut down Southeastern Conference rushing leader Kylin Hill and withstood an injury to quarterback Brian Maurer in a 20-10 victory over Mississippi State on Saturday.

Tennessee (2-4, 1-2 SEC) ended a six-game skid against Football Bowl Subdivision opponents by providing the kind of effort Vols fans had expected from their defense ever since Pruitt — a former national championship defensive coordinator at Alabama and Florida State — took over Tennessee’s program last season.

Before Saturday, Tennessee just had eight sacks all season to match Texas A&M and Vanderbilt for the lowest total of any SEC team. Tennessee recorded 10 tackles for loss against Mississippi State (3-3, 1-2) after having just two last week in a 43-14 loss to No. 3 Georgia.

Tennessee safety Nigel Warrior said the difference was evident in practice this week and that defensive line coach Tracy Rocker had pointed it out.

“Coach Rocker, he said when we were younger we all had that little boy that just wanted to play football no matter what,” said Warrior, who had an interception and two pass breakups. “We came out and played like those little boys who were in the front yard or backyard and wanted to go ball out and just wanted to touch the ball.”

It was obvious in the way Tennessee handled Hill.

Hill entered the day averaging 119.2 rushing yards per game, but Tennessee limited him to 13 yards on 11 carries.

That dominant defense helped Tennessee overcome the loss of Maurer, who was 4-of-7 for 61 yards with two interceptions in his second career start.

The Vols led 7-3 when Maurer dove at the end of a 13-yard run and landed head-first late in the second quarter. The freshman quarterback grabbed the back of his neck immediately after the play. He stayed in the game for the rest of that series but didn’t play again.

Pruitt said after the game that Maurer sustained a concussion. Jarrett Guarantano, who had lost his job as Tennessee’s starting quarterback last week, stepped in for Maurer and went 6-of-7 for 106 yards.

Guarantano’s outing included a game-clinching 39-yard completion to Tyler Byrd with 2:35 left. Tennessee was clinging to a 13-10 lead when Byrd caught a pass about two yards beyond the line of scrimmage, went to his left and raced down the sideline until he reached the end zone.

It wasn’t nearly as much fun for Mississippi State,

Mississippi State quarterback Tommy Stevens was benched in favor of freshman Garrett Shrader after the Penn State graduate transfer went 6-of-11 for 67 yards with two interceptions in the first half.

Shrader was 5-of-10 for 79 yards, with a touchdown and an interception. He also ran for 62 yards on 13 carries. His 17-yard touchdown pass to Deddrick Thomas in the fourth quarter pulled the Bulldogs to within 13-10, but they couldn’t get any closer.

Trailing 20-10, the Bulldogs drove to the Tennessee 20-yard line still with a remote chance of getting two scores to tie the game.

Shrader was sacked twice and then ran for seven yards, forcing the Bulldogs to use their last two timeouts. Jace Christmann missed a 38-yard field goal with 16 seconds left to end any chance of a last-minute miracle.

“We didn’t play well enough in all three phases for all four quarters to have an opportunity to beat an SEC team on the road,” Moorhead said. “I thought we did well on defense for about three and a half quarters, had them pinned back there inside the 10-yard line and then gave up that nine-play, 91-yard drive. I thought we played well throughout the day creating some turnovers, but offensively we couldn’t get anything going in the second half. It’s my responsibility and I’ll get it fixed.”