There’s plenty to be encouraged and discouraged about following Thursday’s town hall held by the Vicksburg Police Department.

The town hall being scheduled — despite having to later be rescheduled due to some scheduling conflicts — is a move in the right direction for the department and its leadership.

In a job that relies on public input for help in solving crimes and curbing violence, a meeting where the public was invited to participate is encouraging.

The format, lack of interaction and perceived lack of community involvement in the process, however, was discouraging.

With nine questions that made it through the department’s screening process and responses that seemed too prepared, the meeting — in all its 22 minutes — did not accomplish its goals.

Yes, the department’s leadership was there to answer questions — questions they had undoubtedly been given in advance to prepare for — but their responses seemed more defensive than informative and at times felt like this was something they “had to do” rather than something they “wanted to do.”

It is natural to not want to be grilled and questioned publically, but in a public service role, which these officers and leaders are serving, facing the public is something that is not only needed but expected. Doing so provides a free share of information back and forth and creates a conversation that builds up the community, rather than rumors and accusations that only serve to tear down a community.

We know more than nine questions were submitted ahead of time, and we understand why some questions cannot be asked and discussed publically, but opening up the format to more public interaction and involvement is crucial when and if future town halls are held.

In an industry where asking questions of our leaders is at the core of what we do, we understand those who choose not to answer and those questions that cannot be answered. But, in many cases just asking the question is enough to impact positive change.

We encourage Chief Milton Moore and Capt. Mike Bryant to schedule regular town halls, in different parts of the community to spark a better conversation between the public and the police. We encourage them to change the format and not be afraid of the questions that might be asked. It is up to them and their policies if those questions can be answered in public.

Our police officers are the best amongst us. They serve at times and in situations many of us would run from. But, their job is dependent on the community’s support and having a better conversation with the community will make that support grow far stronger. 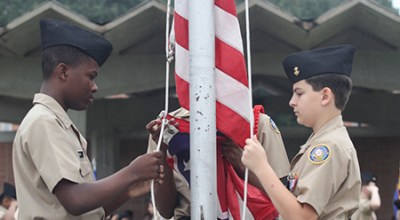 OUR OPINION: Supper on the ‘Sip sales a sure sign