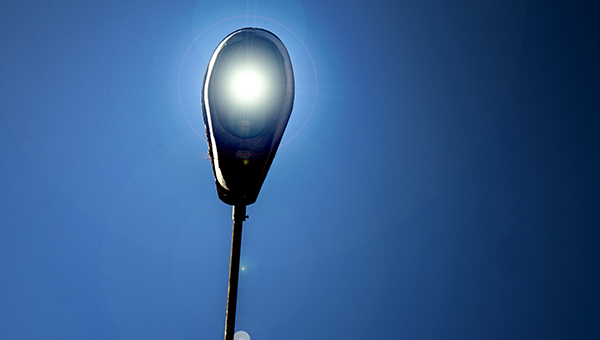 The Board of Mayor and Aldermen are considering a plan to upgrade streetlights on Vicksburg’s main thoroughfares to LED lighting.

According to information presented Monday during the board’s work session by Doug Buckles, lighting coordinator for Entergy Mississippi, the conversion to LED lights on the city’s main streets will cost an estimated $29,186 and save the city about $3,000 per month. The city’s present monthly bill for the lights is $58,630.21. He said the city could recover the installation cost in about 10 months.

The plan involves replacing 891 of the city’s 903 lights on its major streets with LED lights, which are brighter and more energy-efficient. The amount of time to complete the upgrade was undetermined pending further discussion, but Buckles estimated it could take about six months to complete.

No action was taken on the proposal, but Mayor George Flaggs Jr. said the board could vote on it at its Oct. 21 meeting.

“This is the first phase of the Entergy LED lighting proposal because I know some other neighborhoods or streets will want them,” Flaggs said. “It’s a reduction in cost and it’s a matter of public safety. It will provide a whole lot more lighting for the city.”

The list of major streets proposed for the upgrade includes:

• Fisher Ferry from the entrance to Sports Force Parks on the Mississippi to Halls Ferry to Marcus Bottom and then Cherry Street to the Glass Bayou bridge.

• Pemberton Square Boulevard from U.S. 61 South to its intersection with Halls Ferry Road.

Buckles said the present lights near the Klondyke on North Washington Street sit off the road, adding, “we can get better lighting by upgrading those lights.”

He said Entergy will install an off-road fixture in the area along North Washington from the entrance to the Port of Vicksburg to the Klondyke. The fixture, he said, is a combination of lighting systems that cast more light on the road.

Flaggs said the lighting on Washington from 61 North to the Klondyke will include new decorative fixtures. The cost of the new lighting will be paid from the $1 million in capital improvements bond money set aside for the Kings community in 2017.

“All the way from 61 North past Klondyke, we’re going to do new lighting and fixtures if we don’t do anything else,” he said. “They (Kings residents) asked for it first, and that’s where we’re going to start.”