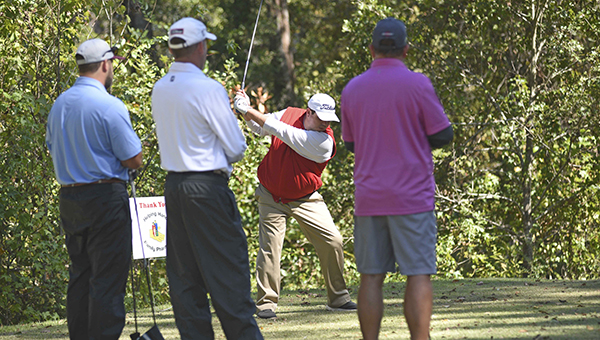 It only took until year three for the Red Carpet Bowl Golf Tournament to crown its first two-time champion.

The team of Pierson Waring, Warren Hood and Brock Campbell shot a 123 in Sunday’s second-round shamble format to wipe out a three-stroke deficit and earn their second consecutive victory in the tournament at Vicksburg Country Club.

The tournament followed a scramble-shamble format for the two rounds. In a scramble, each team plays its best shot. In a shamble, the team plays two balls.

Waring, Hood and Campbell shot a 59 during the scramble round on Saturday and were in second place, three shots behind Ben Brooks, Mike Hurley and Caleb Davis. Four other teams shot 60 on Saturday.

The team of Buddy Fisher, Jerry Hibbard and Birl Spicer shot 129 and was the only other trio to break 130 on Sunday. They finished second, at 189 for the tournament, but that was seven shots behind Waring, Hood and Campbell.

Waring, Hood and Campbell split a $1,000 cash prize for their victory.

The team of Jake Dornbusch, Charles Waring and Chase Smith finished at 191 for the tournament, good for third place.

The tournament was a benefit for the Red Carpet Bowl’s scholarship fund. A total of 96 golfers — 32 three-man teams — competed in the event, eight more than in 2018.

Other flight winners were Brady Ellis, Jamie Creel and Randy Wright in the first flight, and Rusty Larsen, Joshua Larsen and Hartley Sullivan in the second flight.

Ellis, Creel and Wright shot a two-round total of 202 to edge John Robert Ward, Mitchell Saxon and Peyton Saxon by one shot.

Larsen, Larsen and Sullivan were at 214 for the tournament and won their flight by two shots over Mike Abendroth, Preston Walker, and Preston Walker Jr.