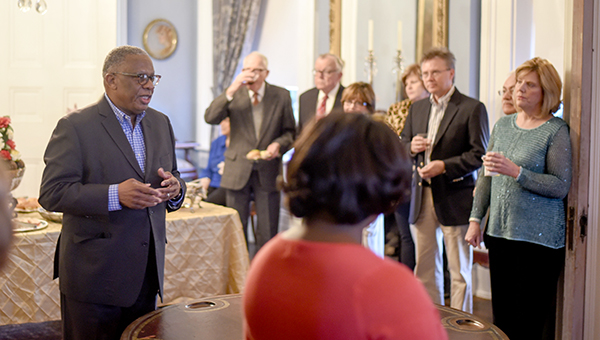 Mayor George Flaggs Jr. speaks to participants at the inaugural “Vicksburg Night at the Symphony” event. This year, the event will be held Saturday, Oct 26, and the Mississippi Symphony Orchestra will perform “Aretha: A Tribute.” (Courtland Wells/Vicksburg Post)

For the third year in a row, the city of Vicksburg will be sponsoring the “Vicksburg Night at the Symphony.”

On Saturday, Oct. 26, patrons will have the opportunity to catch a ride on the city bus and travel to Thalia Mara Hall in Jackson for “Aretha: A Tribute” performed by the Mississippi Symphony Orchestra.

The event will begin at 5 p.m. with a reception at the Martha Vick House, 1300 Grove St. At 6 p.m. participants will board the bus for the concert that begins at 7:30.

“The reception is always so delicious,” “Vicksburg Night at the Symphony” committee member Carol McMillin said.

“And the ride to Thalia Mara Hall in Jackson is so comfortable on the Vicksburg City bus,” she said.

The idea to sponsor an event that would add to the cultural element of the River City was the “brainchild” of Dorothy Brasfield, Frances Koury and Mayor George Flaggs Jr., McMillin said.

And while this will be the third time for locals to attend symphony performances as a group, McMillan said, “Mississippi Symphony concerts are very popular with quite a number of people from Vicksburg, with many regularly attending.”

In the two previous years, a classical music selection was performed as part of the symphony’s Bravo Series, McMillin said, and this year she is confident the musical tribute to Aretha Franklin will also be a hit.

Featured vocalist for the concert will be Capathia Jenkins and Ryan Shaw.

Following the concert, McMillin said, the bus will leave for Vicksburg and return participants to their cars at the Martha Vick.

Tickets to the performance are available at the Mississippi Symphony Orchestra ticket office at 601-960-1565.

“And be sure and tell them it is for the “Vicksburg Night at the Symphony,” McMillin said, in order to be seated in the Vicksburg section as well as receiving a discount.

The Vicksburg city bus has room for 42 passengers, so seating is limited and first-come, first-serve.