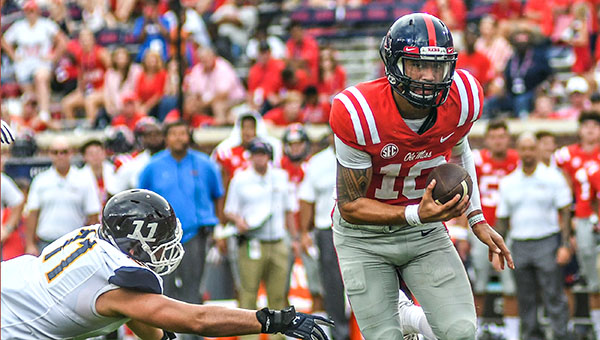 Former Ole Miss quarterback Jordan Ta’amu (10) was picked by the St. Louis BattleHawks in the inaugural XFL draft on Tuesday. Ta’amu was among eight quarterbacks taken in the first phase of selections in the two-day draft. (Bruce Newman/The Oxford Eagle)

Former Ole Miss quarterback Jordan Ta’amu was among the first players to become part of the new XFL.

Ta’amu was one of eight quarterbacks allocated to each of the league’s eight teams before the first round of the draft. He was allocated to the St. Louis Battlehawks.
Ta’amu passed for 3,198 yards and 19 touchdowns for Ole Miss in 2018. He signed with the Houston Texans in August, but was cut at the end of training camp.

Ta’amu is the only one of the eight allocated XFL quarterbacks that has not had any regular-season professional experience.

The rest of the draft was conducted in phases, with offensive skill players, offensive linemen, linebackers and defensive backs being selected in waves.

Ross is Mississippi State’s career leader in receptions, with 199 for 2,528 yards and 22 touchdowns. He signed with the NFL’s Carolina Panthers in 2017 as an undrafted free agent, but spent that season on injured reserve and was cut during training camp in 2018.

Grambling running back Martez Carter went to the Los Angeles Wildcats during the skill position phase.

The XFL draft will conclude on Wednesday. The league’s inaugural season will begin Feb. 8 and 9, the week after the Super Bowl.