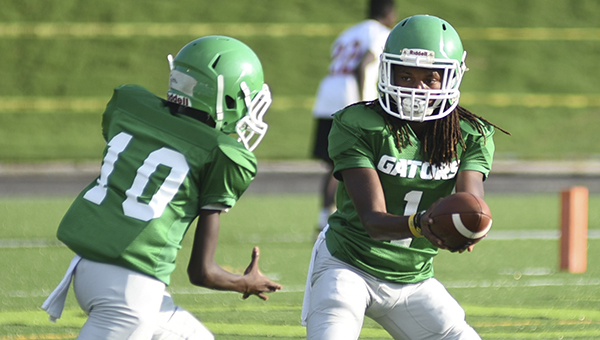 You’re in Four Down Territory. Each week we’ll highlight four notes, stats or trends from the week that was in Mississippi high school football, college football and the NFL.

It’s a little unusual to have returning starters in junior high football, but a wave of them have propelled Vicksburg Junior High to heights not seen in quite a while.

The seventh- and eighth-grade Gators will take on Brandon in the inaugural Little Six Conference championship game Wednesday at 6 p.m. at Memorial Stadium. A win would give Vicksburg its first Little Six championship since 2005, and complete an undefeated season.

“We’ve been pretty close the last couple of years. We’ve been 5-3 the last three years, so we’ve been knocking on the door,” Gators coach Larry Carter said.

One of the big reasons this year’s Gators have broken through, Carter said, was the return of five players on offense and defense who started as seventh-graders. Among them are defensive lineman Demarcus Johnson, quarterback Ronnie Alexander and wide receiver Johnny Smith.

“They came in knowing what to do. We didn’t have to teach them everything from the beginning,” Carter said. “They have experience and confidence.”

This will be the first time the Little Six has played a football championship game. In years past, the team with the best record at the end of the season was crowned champion. This season, the league split into East and West divisions with the winners squaring off at the end. The team with the best regular-season record earned the right to host the title game.

“The coaches have been asking for it. You have championship games in all of the other sports, so we wanted to do one in football. And it gives the kids something to look forward to at the end,” Carter said.

Vicksburg has torn through the league, winning all seven of its games so far. No opponents have scored more than eight points.

The winning streak includes a 30-6 victory over Brandon in September. Alexander ran for two touchdowns and threw for another in that game, while Christian Henderson and Alex Jefferson had long touchdowns. Three of the Gators’ four touchdowns were 50 yards or longer.

“That was early in the season. I expect them to be tougher,” Carter said.

Southern Miss running back DeMichael Harris continued to show off his speed and big-play ability in Saturday’s 45-27 win over North Texas.

The former St. Aloysius star scored two touchdowns in the first quarter, on a 59-yard pass and a 60-yard run, and added a third score on a 13-yard run in the fourth quarter. He finished with 182 total yards — 103 rushing and 79 receiving — as the Golden Eagles remained tied for first place in Conference USA’s West Division.

“I followed Arvin Fletcher and Drake Dorbeck. Drake killed the safety and after I saw him kill the safety I just had to score,” Harris said.

“It’s definitely helping us a lot to have a playmaker back there who can run routes and run from the middle and outside,” said Southern Miss quarterback Jack Abraham. “I thought he showed a lot of explosiveness tonight, especially with that big catch early in the game. It definitely puts a lot more pressure on opposing teams. It’s something else they have to account for. We can guard him in the backfield and then put him out in space.”

In other Southern Miss news, Abraham on Monday was named the C-USA Offensive Player of the Week for the second time this season.

Abraham passed for 421 yards and three touchdowns, and added a rushing touchdown in the win over North Texas. Abraham has thrown for 1,936 yards this season and his 71.7 percent completion rate ranks eighth in the Football Bowl Subdivision.

Dak Prescott wasn’t able to lead the Dallas Cowboys to a victory on Sunday, but he did make some history.

Prescott ran for a 4-yard touchdown with 43 seconds remaining in a 24-22 loss to the New York Jets. It was the 20th rushing touchdown of the former Mississippi State star’s NFL career, which tied him with Hall of Famer Roger Staubach for most by a quarterback in Cowboys’ franchise history.

Staubach played 11 seasons, from 1969-79. Prescott only needed 3 ½ seasons to get there.
Prescott, though, will need a lot more time to break another of Staubach’s franchise records. Staubach is the Cowboys’ all-time leader in quarterback rushing yardage with 2,264 yards. Prescott ranks third, with 1,077 yards. Don Meredith is second on the list, with 1,216 yards.

4
Despite losing 20-10 to Tennessee on Saturday, Mississippi State had a couple of noteworthy milestones.

Its defense had two interceptions and seven sacks, marking its 22nd consecutive game with a takeaway and 28th with a sack. The takeaway streak is the longest in the Football Bowl Subdivision.

Kicker Jace Christmann, meanwhile, made a 51-yard field goal in the second quarter. It was the first 50-plus yard field goal by a Mississippi State kicker since Brent Smith made a 53-yarder against Tennessee in 2002.