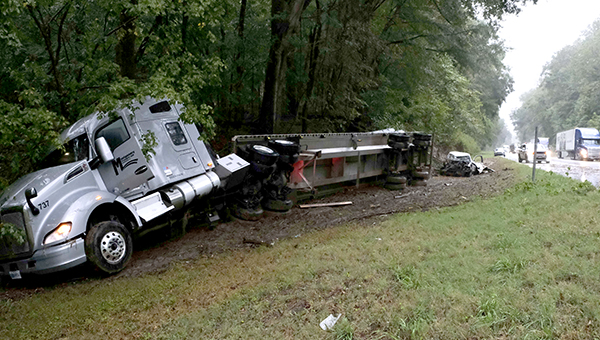 Deputies with the Warren County Sheriff's Office responded to an accident involving an 18-wheeler and a truck near the 7-mile marker on Interstate 20 westbound Tuesday. (Courtland Wells/The Vicksburg Post)

Heavy rains combined with slick streets resulted in a series of wrecks inside the Vicksburg city limits with police responding to 11 wrecks between 6 a.m. and 1:30 p.m. according to information from the Vicksburg Police Department.

One of those wrecks deputies responded to involved an 18-wheeler and a small truck on I-20 westbound. The Mississippi Highway Patrol was in charge of investigating the accident.

The accident, which happened just before 11 a.m., took place at the 7-mile marker on I-20. The 18-wheeler was sent into the woods off the interstate, while the truck suffered significant damage.

There was no report from MHP on the accident or information on any injuries.