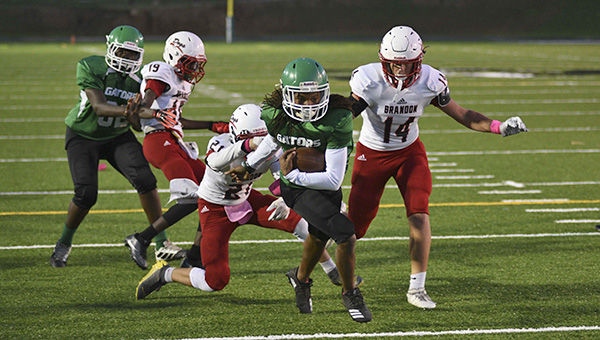 Vicksburg Junior High quarterback Ronnie Alexander (1) scores a touchdown in the third quarter of the Little Six Conference championship game against Brandon on Wednesday. Alexander ran for 118 yards and two touchdowns, including the game-winner in overtime, as the Gators won 28-22. (Courtland Wells/The Vicksburg Post)

The Gators’ defense made two goal line stops late in the fourth quarter and in overtime, and quarterback Ronnie Alexander scored the game-winning touchdown on a 2-yard run as Vicksburg beat Brandon 28-22 in the Little Six Conference football championship game on Wednesday.

“It was amazing,” said Vicksburg running back Alex Jefferson, who carried the ball 12 times for 60 yards and two touchdowns. “This hasn’t happened in over 15 years. So it’s a great accomplishment.”

Vicksburg Junior finished a perfect 8-0 season with its first Little Six championship since 2005. The Gators did not give up more than eight points in any game except the last one, then dug deep to both come from behind and hang on when needed.

Vicksburg had finished 5-3 in each of the previous three seasons, and head coach Larry Carter said winning a championship was a big breakthrough not just for the junior high team but Vicksburg’s football program as a whole.

“Seventh through eighth, we’re really trying to change the program and change our culture,” Carter said. “This is one of the best groups I’ve ever had, especially as far as work ethic. All summer, all the practices this year, we had 97 percent participation. It doesn’t get any better than that. I’ve got a great group coming behind this group, and I think we’re going to do just as well next year.”

This marked the first time the Little Six — a league comprised of junior high teams located along the I-20 corridor in West Central Mississippi — held a football championship game, and it turned into an instant classic.

Brandon had lost 30-6 to Vicksburg during the regular season, but nudged out to an 8-6 lead at halftime. Nate Blount scored on a 2-yard run and added a two-point conversion early in the second quarter, and then the Bulldogs’ defense stopped Alexander at the 2-yard line on the final play of the half.

That set up a frantic second half in which the teams traded the lead four times.

After Jefferson’s 8-yard touchdown run and a two-point conversion by Johnny Smith put Vicksburg ahead 22-16 with 3:01 left in the fourth quarter, Brandon got the ball back at midfield and embarked on what could have been a game-winning drive.

Blount capped the eight-play march with a 7-yard touchdown run to tie the game with 35 seconds remaining. He was stuffed, however, on the two-point try.

Brandon got the ball first in overtime and again put it in Blount’s hands four times in a row. The beefy running back carried the ball 23 times for 105 yards and two touchdowns, but only gained eight when the Bulldogs needed 10. He was stopped at the 2-yard line on fourth-and-goal to keep the score tied at 22.

“I’m still proud of my defense. They did well. We just gave up a couple of big plays. We hadn’t done that all season, and that’s what put them in position to score. We bounced back and we stopped them when it counted,” Carter said.

The Gators got the ball next at the 10-yard line with a chance to win it. Alexander was dropped for a 2-yard loss on first down, and Jefferson got five of it back on second. A quick pass to Christian Henderson moved the ball to the 2-yard line and set up fourth and goal.

With one play to win a championship, Carter kept the ball in the hands of his quarterback Alexander.

“He’s been running the ball pretty hard. We had some good blocking, the momentum was going, and I just thought that was a good play to end the game,” Carter said.
It sure was.

Alexander took a direct snap, got behind his blockers on the left side, and crossed the goal line just before he was tackled. The touchdown capped a night on which he carried the ball 17 times for 118 yards and two touchdowns, and provided a memory that will live forever.

“I wasn’t thinking about nothing but getting in the end zone. I already knew I was going to get in there. I wasn’t nervous,” Alexander said.

As his players celebrated on the field and took turns posing for photos with the Little Six championship trophy, Carter said he was proud not just that the Gators earned it, but with how they did it.

“Right now I just feel like crying,” Carter said. “I knew (Brandon) would come in here tougher than the first time. They played an excellent game. We found ourselves in unfamiliar territory at halftime. We’ve never been down before. But I’m proud of these guys. They bounced back, they didn’t give up, they responded well, they came back and then they held their ground at the end.”