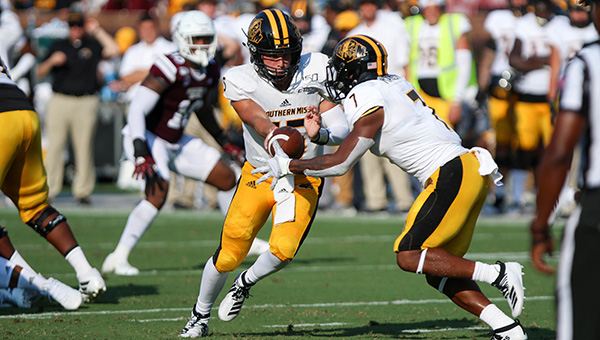 By any measure, Southern Miss’ running game has produced modest results the past two seasons.

The Golden Eagles ranked 13th out of 14 teams in Conference USA in rushing offense in 2018, and are 13th again through six games this season. At 113.3 yards per game, they’re 115th out of 130 teams in the Football Bowl Subdivision.

That doesn’t bother head coach Jay Hopson, though. Where some might see a ground game that goes nowhere, he sees one that’s doing what it needs to when called upon.

“I’ve been pretty vocal about this, but I’ve really felt like we’ve run the ball when we have needed to. There have been a couple of games where we’ve run it pretty good. They’re doing a great job and there’s continuity there,” Hopson said Monday at his weekly news conference. “I just think those guys have played well all season and I haven’t had any issues. They block well, they protect well, and De’Michael (Harris) is really finding his niche in there. He’s made some great cuts. I’m really proud of those guys.”

Harris has scored six touchdowns in all this season, including three of 59 yards or longer.

“(Harris’) locker is right beside mine so we try to get each other going every day and the rule is don’t get caught,” Southern Miss wide receiver Quez Watkins said. “Last year he kept getting caught, this year he’s tuning on the jets so it is pretty exciting.”

Some of Southern Miss’ low rushing totals are attributable to its schedule and the way games have played out.

Southern Miss won a 47-42 shootout with Troy in which quarterback Jack Abraham threw for 514 yards. In road losses to Southeastern Conference teams Mississippi State and Alabama, the Golden Eagles struggled to get much of anything going either on the ground or through the air.

Take away those latter two games and the Golden Eagles’ offensive output jumps from 444.5 yards per game to 524.3.

Now that the Conference USA schedule has begun, they’re finding their groove.

As a team, Southern Miss has run for 310 yards and four touchdowns in wins over C-USA opponents UTEP and North Texas. It’s a small sample size, but the 155 yards per game average is more than 30 yards ahead of its pace over the last season and a half.

The newfound running game has complemented nicely a strong passing game that ranks first in Conference USA at 331.2 yards per game. Quarterback Jack Abraham threw for 421 yards and three touchdowns in Saturday’s 45-27 win over North Texas, and with the running game also getting into gear the Golden Eagles finished with 563 yards of total offense.

Southern Miss (4-2, 2-0 C-USA) goes on the road this Saturday to play Louisiana Tech (5-1, 2-0) in a matchup of the top two teams in total offense in Conference USA, as well as the first- and second-place teams in the West Division.

Abraham said the Golden Eagles’ explosive offense is fun to be a part of.