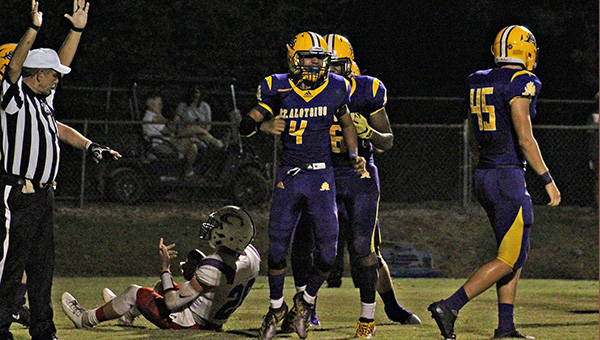 If the MAIS Class 5A football playoffs started today, the St. Aloysius Flashes would be in, but just barely. They’d also be traveling to play one of the state’s heavyweights.

Both are situations they’d like to improve upon, and have an opportunity to do so on Friday night.

The Flashes (3-5) host Washington School (2-6) on homecoming in a game with big implications on the Class 5A wild card race. St. Al currently holds the 12th and final seed in the bracket, while Washington is 13th and just out of the mix.

The MAIS power points formula that determines the wild card berths might allow the loser to head into the final week of the regular season with a chance to still qualify, but St. Al can certainly solidify its position with a victory.

“We can’t afford to screw up and fall down the totem pole,” St. Al coach Michael Fields said. “I’m hoping we can get some kids back healthy, because we’ve proven we can play with all of those (playoff) teams if we’re healthy.”

Health has been a major issue for St. Al the last two weeks. Four starters did not play in last week’s 40-23 loss to Adams County Christian, and several more missed the previous game against Silliman.

With all of those players out, the Flashes were outscored 62-7 in a four-quarter span across the two games. They did rally to score 16 points in the fourth quarter against ACCS.

A couple of starters, including quarterback Phillip Upshaw, returned for the game against ACCS. Some others, such as lineman Sam McMullin, have injuries that might not be as serious as first thought. Another lineman, Carrington Busari, initially was thought to be lost for the season with a torn ACL but could play this week.

The problem, Fields said, is many of them are day-to-day with their various injuries and it’s hard to practice or draft a game plan when he’s not sure who will be available.

“Day to day, we don’t know who’s going to play and it’s screwing up our practices because we have to move people to different positions to cover for people who aren’t there,” Fields said. “It’s very difficult, but I’ve coached small school football for a long time. I’ve had teams like this before, where you have to mix and match and the kids have to be willing to play certain positions they might not be used to.”

Playing Washington at this stage of the season is also something St. Al is not used to. The teams have played four times since St. Al joined the MAIS in 2015, all in September, and Washington has won all of them.

Fields attributed previous losses to Washington on the Generals’ superior depth. This time around, he said, things are a little more even despite St. Al’s rash of injuries. Washington has lost five consecutive games after a 2-1 start, including 56-21 to Class 6A powerhouse Jackson Prep last week.

“We usually play Washington early in the year, and they are always a bigger team with more depth. This year we’ve got them later and they’re as banged up as we are. It’s a more even playing field,” Fields said.