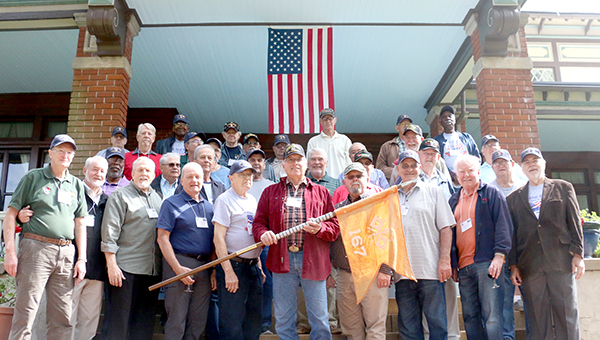 Veterans who served as part of the 167th U.S. Army Signal Corps pose for a photograph following lunch at Dr. Bob and Joyce Clingan's home Wednesday. The group, with veterans from across the country, meet each year in a different city for a reunion. This year, 44 veterans and their wives, attend the group's 21st reunion. (Terri Cowart Frazier/The Vicksburg Post)

Serving together in the military lends itself to lasting friendships.

No better example is there than the men who served as part of the 167th U.S. Army Signal Corps.

Wren, along with 43 other members of the unit, have come together in Vicksburg, part of their annual reunion. This gathering, which is held in different locations each year, marks the 21st year the men, along with their wives have reunited.

Each year, members of the group nominate a location to visit and then they vote, Wren said.

Fellow veteran Jon Stright nominated Vicksburg as a location after he and his wife made a visit to town last year.

Stright said he thought Vicksburg would be a good place to hold the reunion since the group likes to visit historical places.

Wednesday, the group met at the home of Dr. Robert and Joyce Clingan for lunch.

Their job had been to make a list of the attractions and restaurants available in Vicksburg and then share the information with the rest of the group so that plans could be made.

While at the restaurant, the men were inquiring about a facility that would accommodate their group of more than 80, and Clingan offered her home on Cherry Street as an option.

“Seeing how Bob (Clingan, Joyce’s husband) and his first wife Nancy had been Vietnam veterans, I just said, ‘Why don’t you come to our house,’” Joyce said.

Wren said 17 states were represented with veterans “coming from coast to coast.”

Some years, men have traveled as far as Hawaii for the reunion, he said.

In addition to the lunch, the four-day reunion included visits to museums, restaurants and the Vicksburg National Military Park, which was a favorite for the veterans.

The 167th was stationed in Fort Grogan, Ga., Wren said, before shipping out to Vietnam in December 1966.

“We were a unique company in the Army,” Wren said, describing the group’s mission of providing secure communications to field operations. Wren said the group was “like a small battalion since the company was 320 men strong.”

When the group landed in Vietnam, they set up in Nha Trang and were the core command for the central highlands.

“The company went out in three-man teams and were ordered out in the fields to set up wherever we were in camp,” Wren said.

In mid-1967, Wrent said the company moved to Pleiku and then on to An Khe, he said.

During these moves, the company guidon (flag), also traveled with the soldiers.

“This flag was in the front of our orderly room at Fort Gordon, and it was with the company all the way through Vietnam,” Wren said.

Today, the group of veterans carries its guidon to all of the reunions.

Wren pointed out the silver rings that encircled its staff. Each ring represents one of the company’s combat operations.

“Our unit had earned four campaigns in WWII, five in Korea and 11 in Vietnam,” he said.