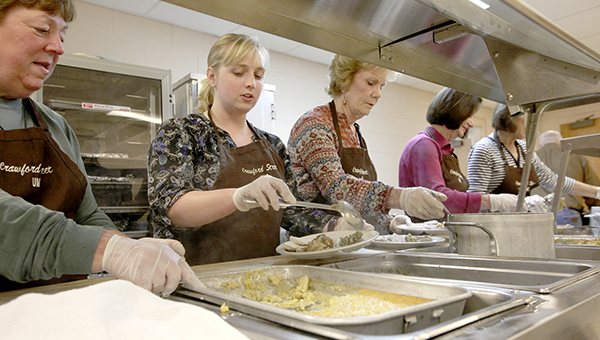 Crawford Street United Methodist Church will continue a long-standing tradition Nov. 14, with its annual turkey dinner from 11 a.m. to 1 p.m. at the church, 900 Crawford St.

Tickets are $10 each for the annual fundraiser, which helps the church’s outreach and ministry programs. And that money touches a lot of communities in and out of Vicksburg.

“We have an executive board that meets and determines specifically how the money is spent, but generally, we divide it into thirds,” church member Linda Turner said. “We spend one-third globally, one-third in the United States and one-third locally.

“All of it goes to the missions; we buy mosquito nets for Africa, bought cows and goats for people in third world countries through the Heifer Project International program located in Arkansas,” she said.

Money raised from the dinner, Turner said, has been used to drill water wells in South American and Central American countries like Honduras and Mexico.

“We have provided funds for mission teams from several local churches here in Vicksburg to go and work in Honduras and Mexico,” she said, adding she and her husband Jimmy have participated in the mission trips for the past 12 years.

She said the projects on the trips vary.

“We’ve gone into the schools and worked with teachers, we’ve built water treatment plants,” Turner said. “Most recently, the crew that went worked at an orphanage laying down waterlines and adding on to the existing buildings, putting up fencing, teaching Bible school.”

When it’s time for the turkey dinner, Turner said, “I cut pies,” adding she heads a group of ladies who will cut about 1,200 slices of pie during the dinner. Her husband, she said, slices turkey, starting about 7 a.m. the morning of the event.

“We also have a subcommittee that weighs turkeys so everybody gets about 4 ounces of turkey that day,” she said.

Other groups prepare additional parts of the menu.

People buying dinners can eat their meals at the church or get them to take out. For more information, call the church at 601-636-5612.

Serving together in the military lends itself to lasting friendships. No better example is there than the men who served... read more