Eagles look ahead to what’s on the table 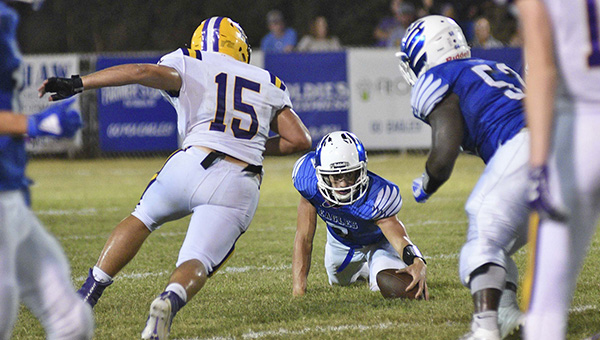 There weren’t a lot of positives to be found in Porter’s Chapel Academy’s 56-0 loss to Greenville Christian last week. So, instead, head coach Blake Purvis got excited about what’s still ahead.

The Eagles have two games left, a mathematical chance to reach the playoffs — and even still win the MAIS District 4-3A championship — and a positive attitude. It’s enough to fuel a dash of optimism as they head into Friday’s road game at Glenbrook.

“I believe we’ve got a short memory. Attitudes have been good at practice. They seem to be working hard at correcting mistakes in our scheme. Hopefully that carries over,” Purvis said. “When they’re still eager to be here and show up and work hard, you can’t ask for more in that regard. It feels like it gives you a chance if you execute on Friday. That’s what we’re missing, is we’re not carrying it over to Friday.”

Even while struggling this season, PCA (2-6, 0-1 District 4-3A) has shown some flashes of breaking through. It has run the ball well at times, and played solid defense at others. Things have occasionally gone sideways in big ways, however.

In their last two losses, the Eagles were outscored 100-6. Against Greenville Christian, they had a promising opening drive on offense, then forced a turnover on defense, and still wound up trailing 37-0 by halftime.

“We made some mental mistakes and bad assignments I thought we had gotten past,” Purvis said. “We see where we’re missing and hopefully have gotten the right reps in practice and corrected those.”

Despite the struggles, PCA is heading into Friday’s game with Glenbrook (5-2, 0-1) still with something to play for. They have a chance to win the district title by winning their last two games, or perhaps clinch a wild card berth in the Class 3A playoffs by winning one of them.

It won’t be easy. Glenbrook is averaging 37 points per game during a four-game winning streak. Next week’s opponent, Greenville-St. Joseph (8-0, 2-0), is undefeated and ranked No. 3 in this week’s Associated Press MAIS poll.

The Eagles are also last among the 17 teams in Class 3A in the power point rankings that determine wild card berths, and 12 teams qualify for the postseason. Only six of PCA’s 10 scheduled games will count toward its power point average, though, so a win this week over a quality Glenbrook team could push it into the top 12 immediately.

Purvis knows the Eagles are a long shot, but got excited at the idea of having something to play for this late in a difficult season.