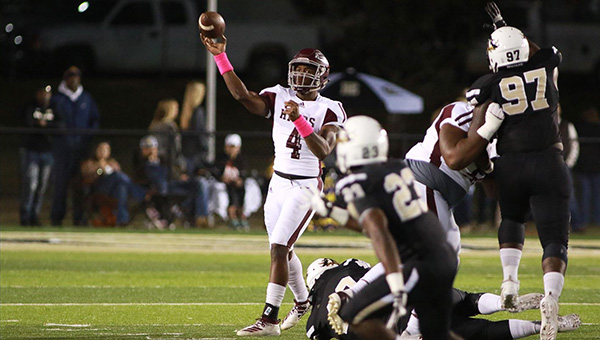 Elijah Walker threw a 26-yard touchdown pass to Trayveon Craig with 23 seconds left in regulation to tie the game, and Carson Flumm kicked a field goal in overtime to win it as the Eagles rallied to beat East Central Community College 23-20 on Thursday.

“We knew if we could just get the ball back that last drive in the fourth quarter, we could win the game,” said Hinds head coach Larry Williams. “Our guys fought hard till the end and never gave up.”

With the win, sixth-ranked Hinds (7-1, 4-1 MACJC South) kept alive its hopes for both a berth in the state playoffs and the South Division title.

Hinds could still miss the playoffs, however, if it loses to Gulf Coast and Jones College (5-2, 3-1) wins its last two games. Jones beat Hinds earlier this season. Jones plays Copiah-Lincoln on Saturday and East Central next Thursday.

East Central (4-4, 3-2) was all but eliminated from the playoff race with the loss, which was its second in a row and third in four games.

East Central running back J.D. Martin ran for 146 yards and two touchdowns on 28 carries. His second touchdown came on a 9-yard run early in the third quarter and gave the Warriors a 20-13 lead that lasted until the final minute of the game.

Hinds got the ball with 1:04 remaining and drove 80 yards in six plays and 41 seconds. Walker completed passes of 16, 20 and 18 yards to move the ball to the East Central 26-yard line, and then found Craig for their second touchdown connection of the game. Flumm’s extra point tied it at 20 with 23 seconds to go.

East Central got the ball first in overtime, but two tackles in the backfield pushed it back to the 37-yard line and out of field goal range. The Warriors were forced to go for it on fourth down and could not convert, setting the stage for Hinds to win it.

The Eagles drove to the 3-yard line, then brought out Flumm for the game-winning 19-yard field goal.

Walker finished the game 19-of-29 passing for 254 yards and two touchdowns, and also ran for 51 yards. Don Ragsdale carried the ball 23 times for 107 yards and a touchdown, while Craig caught four passes for 84 yards and two TDs.

Two of Pearl River’s first downs came via penalties, and most of its yardage total on a 61-yard pass play.

Gulf Coast piled up 511 yards of offense and broke the game open with two touchdowns in the span of a minute in the third quarter.

Deondre House scored on a 67-yard touchdown, and then three plays later Diwun Black returned an interception 30 yards for a score to give the Bulldogs a 19-3 lead with 8:52 left.

House finished with 138 rushing yards for Gulf Coast. Quarterback Chance Loveritch was 21-of-27 passing for 240 yards and one touchdown, and also ran for a score.

Northwest outscored Northeast 28-7 in the first 20 minutes of the second half, after going into halftime with a 13-3 lead. Williams scored on runs of 2, 12 and 4 yards, while Urriah Shephard added a 49-yard TD run.

Four Northeast Mississippi quarterbacks combined to throw three interceptions, and the Tigers ran for just 40 yards as a team.

Christian Cain had two of the Rangers’ three interceptions. The other was returned 30 yards for a touchdown by Quentin Wilfawn.

Former Warren Central star Walt Hopson had one of Northwest’s seven tackles for loss, and the Rangers also had three sacks.

Southwest Mississippi only had 127 yards of total offense.

East Mississippi closed the first half with 24 straight points to blow open a close game and take a 34-8 lead into halftime.

Coahoma quarterback Joe Johnson, a former Vicksburg High star, had a great game in defeat. He completed 18 of 26 passes for 285 yards and two touchdowns, and also scored on a 2-yard run. Johnson’s touchdown passes covered 58 yards to Kalem Reddix and 95 yards to Sammy Carter.