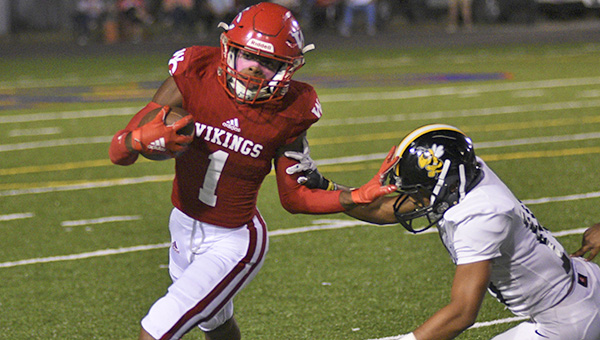 Warren Central’s Demond Patton (1) stiff-arms a Greenville defender. Patton leads the Vikings with 26 receptions for 327 yards this season. He and the Vikings will play Murrah at home Friday at 7 p.m. (Courtland Wells/The Vicksburg Post)

It’s halftime on the Region 2-6A schedule, which seems like an appropriate time for Warren Central to get a break.

The Vikings welcome a struggling Murrah team — the only one in Region 2-6A that has less than three wins — to town on Friday night. While they’re certainly not overlooking the Mustangs (1-6, 0-3 Region 2-6A), it’s obvious that facing a one-win team is the softest point during a brutal five-week stretch.

Warren Central (4-3, 2-1) is coming off a loss to No. 1 Madison Central, faces Clinton next week in a game that will likely determine a playoff berth, and then closes the regular season against No. 2 Starkville and No. 3 South Panola.

“It’s an opportunity for us to get to 3-1. We’re trying to get back on track from a tough loss last week and take care of business. This is a big part of all of that,” Warren Central coach Josh Morgan said. “Our opportunity is not only getting better for Murrah, but to correct some things and get better. We have to respond the right way.”

Murrah has lost six consecutive games since beating Wingfield in its opener, and has only averaged 5.8 points per game during the losing streak. It has been shut out the last two weeks against Madison Central and Clinton.

Even so, Morgan said Murrah, like many teams, presents some individual matchup problems.

“Murrah is very good defensively. They’re really good on the defensive line. They’re big, strong and fast. That pops up as a big challenge. We have to control the line of scrimmage,” Morgan said.

While there is no shame in being victimized by one of the best players in the state, Morgan said that loss did expose some weaknesses the Vikings need to correct in a hurry.

“We competed very hard. They were able to run the ball consistently and we weren’t,” Morgan said. “They used their strength, which is the offensive line. There’s a lot of learning to do in that game.”

This week will also mark a jumping off point for the Vikings in terms of the quality of their opponents. Murrah is one of only two opponents on the 11-game schedule that does not already have three wins. The winner of next week’s Warren Central-Clinton game will have the inside track to a playoff berth in Region 2-6A, and matchups with two of the top three teams in the Associated Press Class 6A rankings loom after that.

The Vikings, of course, have bigger goals in mind than merely claiming a playoff spot. They are still mathematically alive for the region championship and can host a first-round playoff game by winning out. A win this week would put them in a tie for second place in Region 2-6A.

They’ve set themselves up to make a run at all of those things, but it starts with handling their business against Murrah.

“This is the part where our district really starts playing out, this week and next,” Morgan said. “We’re really in a good spot. We have to take care of the task at hand and improve. If we do that, we’re sitting in a really good spot to make a run.”