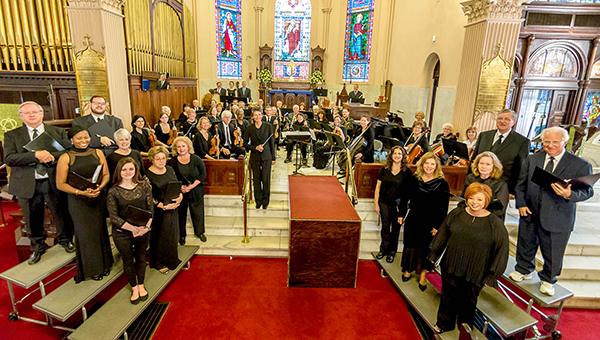 Holding her cello case, Lee Byrne stood just outside the door listening to the orchestra practice.

Although in her 80s, Byrne was a beginner player and upon leaving her cello lesson, week after week she would linger and listen to the group.

Bishop is the conductor of the Vicksburg Orchestral Society, a group that was established nearly 10 years ago for the purpose of not only offering musical concerts to the community, but to provide a creative outlet for those who enjoy performing.

“When we were founded our motto became ‘Music by Vicksburg for Vicksburg,’” Mihan Taylor said.

This was important, Taylor said, because it allowed local musicians the opportunity to perform in the community where they lived and worked.

Dorothy Brasfield, who is the founder of the Conservatory of the Fine Arts and who Bishop referred to as their “fearless leader,” was the one who set in motion the idea of a local orchestra, along with a core group that included Sandy Shugars, Burhman Gates and Taylor.

Comprised of musicians with varying skill levels, the VOS has grown through the years. Because of its success, the orchestra has begun to attract musicians from areas outside of Vicksburg.

The caliber of music offered has also evolved.

“As the orchestra has grown and the interest in playing more difficult music, that has led us to supplement and use people from other areas,” Bishop said.

Some of the more difficult pieces the VOS has performed include “Harold in Italy, Op. 16” by Hector Berlioz and the Saint-Saëns — Symphony No. 3: “Organ Symphony.”

“That was challenging,” Bishop said, “But the orchestra loves the challenge, and they always step up to the plate on concert day.”

While the orchestra does tackle some complicated pieces of music, Bishop said the VOS is “very good” at balancing what the player would like.

“We try to choose pieces of music that will appeal to all levels of players of the orchestra from students to professionals,” she said.

“And any player who is interested,” Shugars added, “Needs to know they don’t have to play every single note in order to be part of the orchestra.”

Like Byrne, who played with the VOS until she could no longer get her cello in and out of the car, herself, Bishop said.

Shugars said anyone is welcome to be part of the VOS; there are no fees and you do not have to ask permission, just come.

“The welcome mat is out,” she said.

VOS practices are held at the conservatory, which is located at 920 South St., on Tuesday nights typically six to eight weeks before a concert.

A Pops concert is offered in the spring. On the Sunday before the Fourth of July the orchestra performs patriotic music, and for the fall concert classical selections are played.

All concerts are held at The Church of the Holy Trinity.

The VOS welcomes all ages to their performance, Taylor said, adding one year the group even performed Sergei Prokofiev’s “Peter and the Wolf.”

The VOS has also had a Halloween costume contest where the orchestra and audience wore costumes, and they did a Christmas table-decorating contest at the Southern Cultural Heritage Center and paired it with a dinner.

Also, several of the VOS performances have included a choir.

The eclectic group, Bishop said, is comprised of musicians from varying backgrounds and careers.

There are many scientists in the group, she said, as well as music teachers, lawyers, doctors, and professors.

“We have a lot of folks who were excellent through high school and college and then went on to other careers and have now picked their instruments up 20 years later,” Bishop said.

While there are some musicians who are more advanced than others, Taylor said most are intermediate players.

In addition to the orchestra having varying degrees of talent, it also has a mix of young and old with a few multi-generational participants.

Longtime Vicksburg resident E.C. Loflin, also known as “Ish,” was a member of the VOS along with his granddaughter Della Loflin.

The VOS currently has about 35 musicians who perform.

“We have some people who can’t play certain concerts and some who can play others,” Bishop said.

Bishop, who is also a principle trumpet player with the Mississippi Symphony Orchestra, said although she had never conducted an orchestra before, she has enjoyed the experience with the VOS.

“I have loved learning how to conduct, and I love this group of folks. It is just a fantastic group of folks that come together every week when they can and have fun,” she said.

“I like playing with an orchestra because it is a community of people you can get to know and meet through music,” Shugars said. “We have established a community within the community.”

Taylor, who is a geophysicist at the U.S. Army Engineer Research and Development Center, and has an “unofficial” minor in music, likened being part of the VOS as being “part of something alive and greater than yourself.”

“If you play with part of a group that is big enough to surround you with sound and music, you feel it through all of your body, and for some it becomes a feeling you chase for the rest of your life and having a community you can do that with gives something back to us,” Taylor said.

The VOS 2019 fall concert, entitled “Musical Monuments,” and has a veterans’ theme, is scheduled for Sunday, Nov. 10 at 4 p.m. Included in the performance will be Haydn’s “Military” Symphony No. 100.