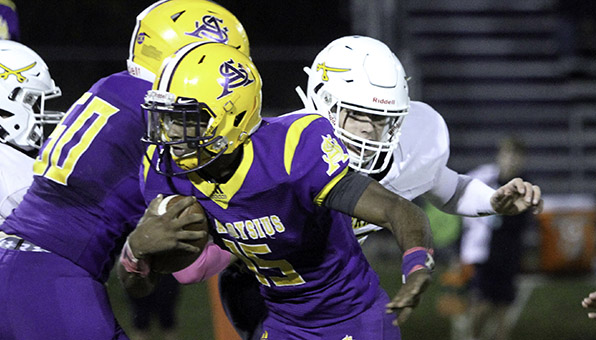 St. Aloysius quarterback Alvin Brown (15) runs with the football Friday against Washington School. Brown ran for 138 yards and two touchdowns, and threw for 79 yards and two TDs to lead the Flashes to a 47-20 victory. (Paul Ingram/For The Vicksburg Post)

On homecoming night at Balzli Field, the St. Aloysius Flashes very likely punched their ticket to an even better dance.

Alvin Brown ran for 138 yards and two touchdowns, and threw for two more scores, as the Flashes routed Washington School 47-20 on Friday.

St. Al scored 27 points in the first quarter and all but wrapped up a wild card berth in the MAIS Class 5A playoffs with the victory. It entered the game holding the 12th and final spot in the bracket — Washington was No. 13 in the MAIS power point rankings — and earned a crucial win while knocking off its closest competitor.

St. Al moved up to No. 11 in the power point rankings that determine the wild card berths and seeding with one game left. St. Al (4-5) finishes the regular season at home against Cathedral next week.

“I guess it ain’t over until it’s over, and it makes next week a big one. We just have to take it step by step and make sure we handle our business next week,” St. Al coach Michael Fields said.

St. Al had only scored 31 points combined in its previous two games, but nearly matched that total in the first 12 minutes Friday.

Trinye Brown caught two touchdown passes — a 28-yarder on a halfback pass from Kieran Theriot, and a 42-yarder from his brother Alvin — to stake St. Al to a 14-0 lead less than five minutes into the game. Alvin Brown then added rushing touchdowns of 2 and 8 yards to make it 27-0 with 1:40 left in the first quarter.

Alvin Brown threw another touchdown pass in the second quarter, this one for 28 yards to Theriot, and St. Al led 34-7 at halftime.

“It was good to see the kids were focused. We had a good week of practice and it showed,” Fields said. “We mixed the run and pass, and guys carried out their assignments well. Then, defensively, we were solid. The kids were focused and played hard.”

St. Al’s scoring in the second half came on a 26-yard interception return by Adam Francisco and a 59-yard run by Brennan Williams.

Alvin Brown and Theriot combined to go 5-of-9 passing for 137 yards, with three touchdowns and no interceptions. Michael Robinson led the defense with 10 tackles and one fumble recovery.