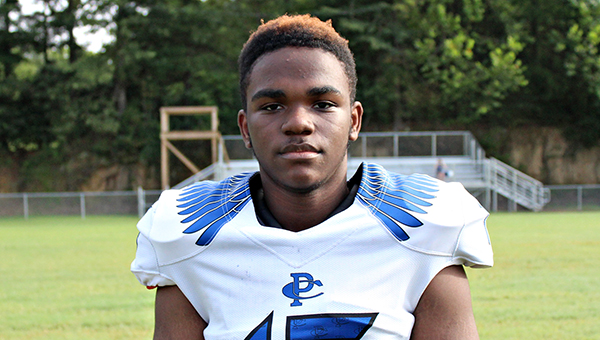 Porter’s Chapel Academy running back Tyler Washington ran for 125 yards on 20 carries Friday in a 39-0 loss to Glenbrook.

Porter’s Chapel Academy might be in the most competitive district in MAIS Class 3A. For a team that has struggled all season long, that is not a good thing.

Glenbrook scored three touchdowns in the second quarter to blow open a close game, and went on to beat PCA 39-0 on Friday night.

It was PCA’s second district loss in a row — it has been outscored 95-0 by Glenbrook and Greenville Christian — and it will face undefeated Greenville-St. Joseph in the season finale next Friday.

“You’ve just got to put it behind you. I was much more pleased with our effort. I thought we were much more physical and played harder. We just went against a bigger, stronger and faster opponent, but we didn’t back down for four quarters,” PCA coach Blake Purvis said, adding that he hopes next week’s formidable challenge inspires the Eagles to raise their game. “If you can’t get up for the final game of the year against the No. 1 team in the state, then there’s something wrong.”

Despite the lopsided final score, there were some bright spots for PCA (2-7, 0-2 District 4-3A). Tyler Washington ran for 125 yards on 20 carries. On defense, Nick Powell and Jairus Cobbs each had eight tackles, while Michael Tod Andrews and Dwight Blue had seven each. Andrews also had an interception.

Glenbrook (6-2, 1-1) connected on a couple of long pass plays in the second quarter to score and turn a 7-0 game at the end of the first quarter into a 27-0 margin by halftime.

“They made really good throws and catches. We had guys in position to make plays. One tipped off our fingers and they caught it. Just bad luck,” Purvis said.