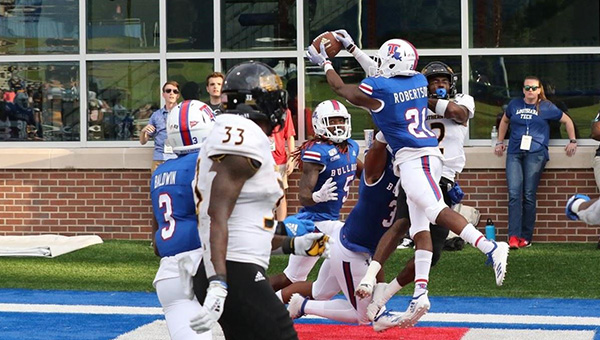 Louisiana Tech defensive back Amik Robertson (21) intercepts a pass in the end zone in the fourth quarter of Saturday’s game against Southern Miss. It was one of three interceptions Robertson had in the game, as Louisiana Tech won 45-30. (Tom Morris/Louisiana Tech Athletics)

RUSTON, La. (AP) — In a high-scoring offensive shootout, it was defense that made the difference.

Louisiana Tech (6-1, 3-0 Conference USA) held the Golden Eagles (4-3, 2-1) to three points in the second half and took over sole possession of first place in Conference USA’s West Division.

Louisiana Tech quarterback J’Mar Smith threw for 325 yards, with 212 of those going to Malik Stanley.

Smith completed 14 of 21 passes with one touchdown — a 56-yarder to Stanley — and an interception. Smith also scored on a quarterback sneak early in the fourth quarter to give Louisiana Tech the lead for good.

Justin Henderson had 111 rushing yards and two touchdowns for the Bulldogs.

Southern Miss quarterback Jack Abraham was 26-of-40 passing for 327 yards and one touchdown, and also ran for a 37-yard touchdown, but threw four interceptions.

Abraham threw threw of his four interceptions in the fourth quarter. One of them was by Robertson in the end zone and led to a 1-yard rushing touchdown by Bobby Holly that put Louisiana Tech ahead 38-27 with 6:28 remaining.

Another was returned 30 yards by Barnett to make it 45-30 with 1:27 left. Robertson got one final pick on Southern Miss’ last drive, with just over a minute to go.

Elvia Payton broke up a third-down pass in overtime, forcing the Delta Devils to try a 44-yard field goal, which missed.

Ponder threw a 19-yard touchdown pass to DD Bowie to get the Tigers on the board just before halftime and start a 28-0 run.

Freshman Kymari Clarke’s 7-yard TD run gave the Tigers a 28-21 lead with 1:21 remaining in the fourth quarter. Dejerric Bryant sent the game into OT when his 7-yard touchdown run knotted the score at 28-28 with 28 seconds left in regulation.

Clarke led all rushers with 171 yards on 20 carries.

Hardin-Simmons 63, Belhaven 7
Kyle Jones completed 17 of 20 passes for 360 yards and five touchdowns — four of them in the first half — as Hardin-Simmons (5-1, 4-1 American Southwest Conference) crushed Belhaven.

Hardin-Simmons rolled up 635 yards of total offense. Eleven different receivers caught a pass, while Marc Reed led the running game with 96 yards and a touchdown on only five carries.

The only touchdown for Belhaven (1-6, 1-5) came on a 1-yard pass from Hunter McEachern to Brooks Brymer early in the fourth quarter. It made the score 49-7.

McEachern finished 15-of-25 passing for 98 yards and the Blazers had a meager 184 yards of total offense.

Millsaps quarterback Amryn Jeffrey threw a 6-yard TD pass to Austin Russell with 13:22 left in the fourth quarter, but the Majors couldn’t put together a drive for the tying score.

Millsaps fumbled a punt in the fourth quarter, and two other possessions ended on downs.