Ridgeland rolls over, through Vicksburg 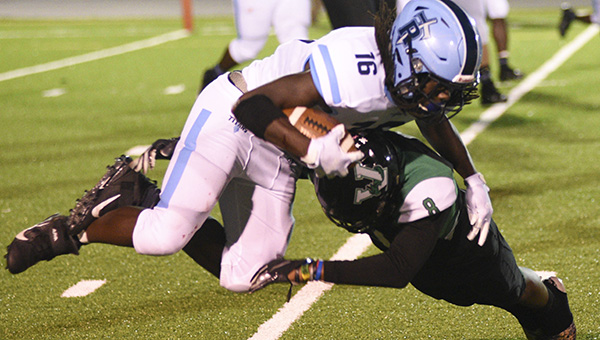 There’s still time for the surge, but it did not start against Ridgeland.

Quarterback Zy McDonald threw for 267 yards and three touchdowns, and added 40 yards and two more touchdowns on the ground as Ridgeland rolled past the Gators 61-7 on Friday at Memorial Stadium.

Ridgeland (7-1, 4-0 MHSAA Region 2-5A) won its fourth consecutive game and remained in first place in Region 2-5A. It has already surpassed last year’s win total and with Friday’s win assured itself of its first winning season since 2013.

Vicksburg (1-7, 0-4) lost for the sixth time in a row. It would need to win its last three games against Callaway, Canton and Holmes County Central, and get some help with other results, to have a chance at making the playoffs.

Vicksburg travels to Jackson next week to play Callaway in a Thursday night game.
Cedric Phillips broke off a 79-yard touchdown run for the Gators in the first half on Friday, and finished with 127 yards on 10 carries. The Gators as a team managed only 203 yards, however, while Ridgeland racked up 444.

VHS quarterback Sha’Kori Regan was 10-of-25 passing for 64 yards, with no touchdowns and three interceptions. Deandre McCalpin caught six passes for 33 yards.